Sweden’s Henrik Stenson has created history becoming the first golfer ever to win the PGA Tour’s FedEx Cup and European Tour’s Race to Dubai in the same season.

Stenson shot a final round eight under par 64 that included an eagle at the last to capture the year-ending DP World Tour Championship by six shots with a 25-under par victory tally on the Earth Course at the Jumeriah Estates course. 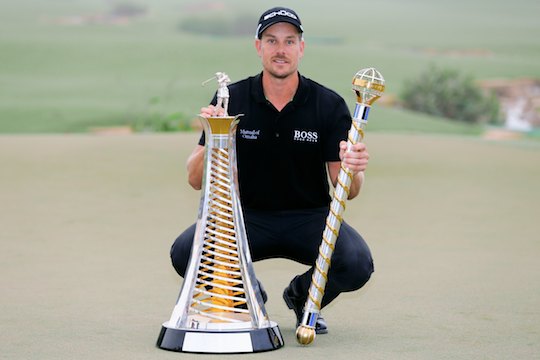 Stenson also is only the second Swede in the history of the European Tour to capture the European No. 1 title.

It was Stenson’s first European Tour success this year after winning two of the closing four FedEx Cup Play Off Series events.

“It is still taking a little time to sink in what I’ve achieved this week as was the case when I won the FedEx Cup but then it just kept getting better and better as the days went on and I am sure this will be the same,” he said.

“I have managed to do something very, very special here this week by winning both in America and the Race to Dubai.

“I am just very, very pleased with the way I played. I knew it was going to be a tough week as I knew the guys like Justin (Rose) and Ian (Poulter) would come charging at me and try to catch me.

“So I am just so happy with the way I managed myself around the course these four days and also played the final round and that final hole so nice.”

Over the four days, Stenson hit 17 greens in regulation each round but he saved the best for last in producing what should now be voted the European Tour Shot of the Year in landing his 237-meter 3-wood second shot at the last to just a foot for the easiest of eagle ‘threes’.

England’s Ian Poulter birdied his closing two holes to shoot a 66 and finish second on 19-under par, and also in second position on the Race to Dubai but $US 1,530,929 adrift of his Lake Nona neighbour.

“I have to take my hat off to Henrik as he is unbelievable,” said Poulter.

“I tried to run him down as hard as I could but even with a sore wrist he has pressed on and I just could not get close enough.

“Henrik has not made a mistake all week and all I could do was make sure of second place and some valuable Ryder Cup points.

“I have thrown a lot of him and given him so much stick but he is the best player on the planet right now.”

Frencman Victor Dubuisson shot a 71 to be third on 17 under par to end the season sixth on the Race to Dubai.

And out-going European No. 1 Rory McIlroy continues to show signs of getting back to his best with a closing round 67 to share fifth place at 15-under par.

McIlroy will take a week off before teeing up in the November 28th commencing Australian Open in Sydney.