Stenson also moved back to No. 2 on the world rankings following his last round 70 to win for the first time this year with a 16-under par tally on the Earth Course at Jumeriah Estates in Dubai. 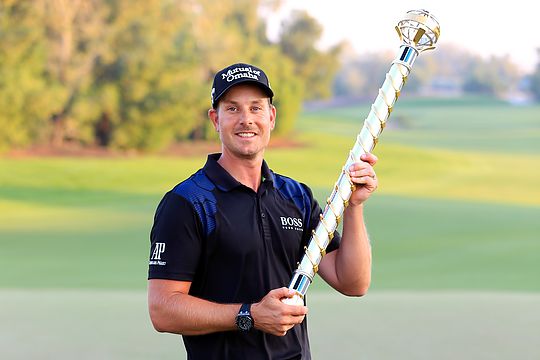 The win is also Stenson’s 16th worldwide but the first time the 38-year old Stenson has successfully defended a tournament and ensures he ends the European Tour season also second to McIlroy on the Race to Dubai.

“I’m now getting another photo of me with a trophy to put up at home in the office,” he said smiling.

“The only thing missing in coming here this week was a victory this year. It was such a great place for me to win here last year, so to come back and successfully defend is very pleasing.”

“I also felt it was never much of an issue not having successfully defended a tournament so I’m happy to come through and do that for the first time this week.”

“I’ll be back to try and make it three wins in a row next year.”

Stenson’s move to world number two unseats Australia’s Adam Scott but with last year’s Masters champion teeing up in this week’s Australian Open in Sydney and with the tournament carrying double World Ranking points, his stay in the number two position could be a short one.

The Swede earned a first prize of €1.067 million ($US1.133m) to take his earnings for the season to €4.981 million and his European Tour career winnings past the €20m barrier in 14 full seasons on the European Tour.

McIlroy, who is now headed to Sydney for Thursday’s start to his defence of the Australian Open title at The Australian Club, was ‘surprised’ to have played so poorly over the final three days in Dubai and still be in with a chance of a sixth victory this year.

The World No. 1 had ended his round with the clubhouse lead on 14-under par but rather then head to the range he remained within the Scorer’s Hut watching events unfold on TV coverage of the $US8m event.

“I can’t believe I have a chance to win the event,” said at the time.

He was then joined in the lead by Rose who picked off three birdies in succession from the 14th and soon after by Dubuisson who birdied the last.

However Stenson went to 15-under par when he birdied the 17th and while the Swede was in the rough left off the tee at the last, he found the fairway with his second before landing his third pin-high right and sealed the fate of his three Gleneagles colleagues by holing the 15-foot birdie putt.

“I never expected 14-under par would have the remotest chance of winning this golf tournament,” said McIlroy.

“It just seemed like no one really took the tournament by the scruff of the neck and went with it.”

“But then I didn’t play well enough to win this week, and if I had of won by playing like this, it would have been a bit of a surprise.”

However there was surprise when Spain’s Rafa Cabrera-Bello who was leading with three holes to play and looking assured of a second victory in Dubai after capturing the 2012 Dubai Desert Classic before tumbling down the board with back to back double bogeys at 16 and 17.

Cabrera-Bello eventually signed for a 75 to share ninth place on 11-under par.