Sweden’s Henrik Stenson won his second Race to Dubai title to end 2016 as the European No. 1 and rightfully declare the season to be best of his career.

The Open champion closed his 16th European Tour season with a 7-under 65 at the DP World Tour Championship, bringing the curtain down on a year in which he became the first Swede to win a major with his triumph at Royal Troon in July and also claimed an Olympic silver medal. 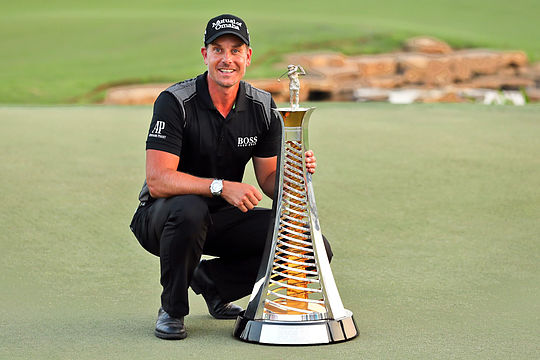 Along with victory at Royal Troon, Stenson also won the BMW International Open in Germany and three other top two finishes.

“Yeah, it’s been a great year,” he said. “It’s been the best year of my career when I sum it up, and this certainly didn’t make it any worse.”

“There’s some very nice names on this trophy, so I’m delighted and proud to get my name on it again. It’s hard enough to do one time, but to do two is something I’m very pleased with, and of course it shows how well I played over the course of the year.”

“As you know, the BMW International Open win, and the win at The Open, but then it was another I think ten really good tournaments throughout the year that when we sum it all up, that’s why we’re sitting here with this right next to me. Yeah, very pleased with the way I perform this year and it will go down as the best year of my career.”

Henrik Stenson: What’s In The Bag

Stenson’s victory in the Race to Dubai also secured an additional $1.25 million bonus from the $5 million Bonus Pool awarded to the top ten at the season’s end.

Having previously won the Race to Dubai in 2013, Stenson becomes only the third continental European and 12th player in total to finish Number One on more than one occasion, joining the likes of Seve Ballesteros, Bernhard Langer, Rory McIlroy, Ernie Els, Colin Montgomerie, and Sir Nick Faldo.

Having started his season with a second place in the Nedbank Golf Challenge and joint third in the Abu Dhabi HSBC Golf Championship, it was not until June that he first tasted victory, winning the BMW International Open in Munich with a three-stroke victory at Gut Lärchenhof.

Buoyed by winning confidence, Stenson went on to produce one of the greatest performances ever witnessed in an Open Championship to win the Claret Jug. Going toe-to-toe with Phil Mickelson, Stenson’s closing 63 broke a host of records including the lowest total to par in Open history and the lowest ever final round by a winner.

His 63 – a total matched by Mickelson on Thursday – equalled the lowest round in Major history and his 264 aggregate score was the lowest ever in a Major Championship.

From that moment Stenson and Willett, who made his own breakthrough with his Masters victory in April, were fighting for top spot on the Race to Dubai, with Stenson edging ahead after finishing joint second in the WGC-HSBC Champions in Shanghai and then holding the challengers at bay over the course of the Final Series.

Recalling the names on the Harry Vardon Trophy awarded to the European Tour Number One, Stenson said: “We’ve got Ballesteros, we’ve got Langer, we’ve got Faldo, and then of course in the later years, we’re more familiar with the names who won it; and Norman is on there. It shows a lot of history.”

As to what he would do with the latest addition to his trophy cabinet, he had an answer for that. “I’m very pleased because I’ve got two DP World Tour Championships and I’ve got two Race to Dubai titles. I have my home in Sweden and I have my home in America, so I can spread it out and make it look good in both places.”