Sweden’s Henrik Stenson has had a rough few weeks with his move to LIV Golf resulting in the termination of his tenure as the 2023 Ryder Cup captain. However the “Ice Man” lived up to his name after blocking out all of the noise to win on debut at the Trump National Golf Club in Bedminster, NJ on Sunday.

Despite victory at the 2019 Hero World Challenge, the 46-year-old Swede hasn’t won an official PGA Tour tournament since the 2017 Wyndham Championship. Sunday’s $4 million first prize along with a share of the $1.5 million purse on offer as part of the second-placed Majesticks team means he walks away with close to his total winnings over the past five seasons on the PGA Tour.

“It has been a bit of a roller coaster, no question..you’ve all seen that,” said Stenson about his loss of the Ryder Cup captaincy and move to LIV Golf.

“Now it’s about looking forward, for me at least, and yeah, I’m super proud with the focus I managed to have this week and to get my game in — I’ve been working pretty hard to get the game back in shape, and it’s certainly going in the right direction as we know now.”

“I’d super proud really to come out and grind it out like I did over the last three days and to sit here as the winner.” 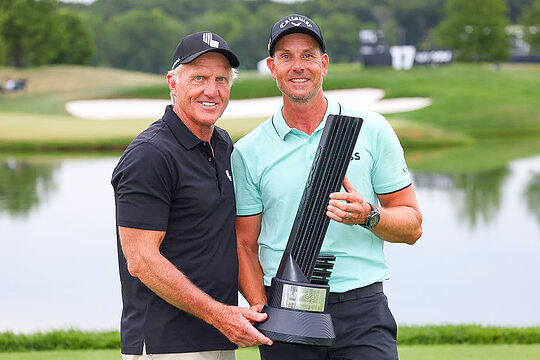 Matthew Wolff carded a final round 7-under 64 to join Dustin Johnson on 9-under and two shots short of Stenson, who finished on 11-under thanks also to an opening round 64.

Carlos Ortiz was alone in 4th on 8-under with Patrick Reed rounding out the top-5 with a 7-under total.

The 4 Aces (Gooch/Johnson/Perez/Reed) will split $3 million for their efforts, making it their second straight team win in the US for a total of $6 million and $1.5 million each.

Matt Jones lead the way for the Australians in a share of 19th place alongside Louis Oosthuizen and fellow South African, Justin Harding on 1-over.

With the FedExCup Playoffs getting underway soon on the PGA Tour the LIV Golf schedule takes a one-month break before returning in Boston on September 2.