Dusseldorf, Germany: Double winning BMW International Open winner Henrik Stenson will head to Royal Troon for two days ahead of next month’s Aberdeen Asset Management Scottish Open in a goal of becoming the first Swede to capture The Open.

Stenson did that three years ago when Castle Stuart last hosted the Scottish Open also spending two days of that week familiarising himself with Muirfield to then share third place along the Moray Firth shoreline behind Phil Mickelson. 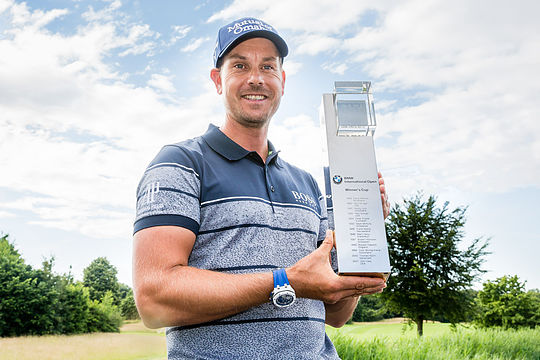 A week later, Stenson then finished runner-up to Mickelson at Muirfield and now the 40-year old Swede is hoping the same pre-Open Championship scouting mission could lead to being handed the famed Claret Jug.

“I went to Muirfield early also in 2013 ahead of playing the Scottish when we were last at Castle Stuart and then looked where I finished in The Open,” said Stenson.

“So maybe be heading to Royal Troon ahead of this year’s Scottish Open I can go one better in this year’s Open.”

Stenson was commenting after further cementing his Hazeltine place with a three shot victory near Cologne in Germany.

In the process, Stenson ended an 18-month winless drought completing 36-holes over the final day with scores of 67 and 71 for a 17-under par tally on a rain-softened Gut Larcenhof course.

However, more importantly Stenson has locked-in a fourth Ryder Cup cap and the oldest to date in Darren Clarke’s team.

“I had virtually wrapped-up my place in the Ryder Cup but then this win should be a huge boost for our team as there is a few rookies who could be in the side, and we are also going to need plenty of experience,” he said.

“But in saying that there is a lot of experience just of the edge of being selected and with two Majors and the FedEx Cup Series still to play.”

Marcus Fraser was the best of the Aussies in a tie for 21st with Nick Cullen firing back to back rounds of 75 across the weekend to fall in to 59th place at 3-over.