Steph Kyriacou excited to get back on track

Sydney’s Steph Kyriacou had quite the year in 2021. Between breakthrough wins in Europe and securing her LPGA card in the US, the 21-year-old just couldn’t go wrong.

Ironically it was only once she was back home on Australian soil that things didn’t quite go to plan. First it was a bout of COVID, which kept her out of the inaugural WPGA Championship in Brisbane followed by a missed cut at the TPS Victoria and a tie for 22nd at the Vic Open. 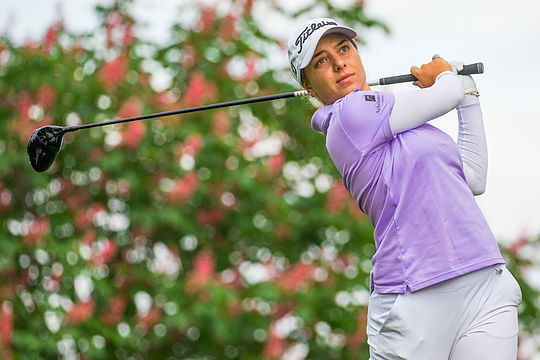 “I managed to go home for three months which was great after spending seven months away,” Kyriacou said in an LET interview ahead of this week’s Saudi Ladies Invitational and her first international start of the season.

“I took a little break to just relax and then slowly got back into it. I’ve made a couple changes in my game which have been hard to transition into, but I’m pretty confident with how I’m playing now.”

“I didn’t play great in the events at home, but it was nice to play in front of an Aussie crowd and get back into competition golf again.”

Kyriacou will be hoping to reignite the form that saw her finish in a share of 9th place at last year’s Saudi Ladies International. It was here on the Royal Greens Golf & Country Club layout a year earlier that she also set the course record with a final round of 9-under 63 in the Saudi Ladies Team International event.

“I’m very excited to be at Royal Greens, I love the course. I think this course is a good challenge and it suits my eye.”

“I’ve played here a lot, so I’m not scared to hit the golf shots I need. When I first played at Royal Greens, I was scared to hit a few shots, but now I’ve lost that fear,” said Kyriacou, who also finished 4th at the inaugural Saudi Ladies International in 2020.

“I’m looking forward to competing again, I only got to play in a couple events earlier on but now I feel ready.”

Western Australia’s Whitney Hillier will join Kyriacou in the Ladies European Tour field. Like Kyriacou, Hillier has also posted impressive results at the tournament finishing in a share of 5th last year following a T24 debut in 2020.