Starting the round with a five shot lead Stephens got off to a shaky start when he made bogey on his first hole of the day. 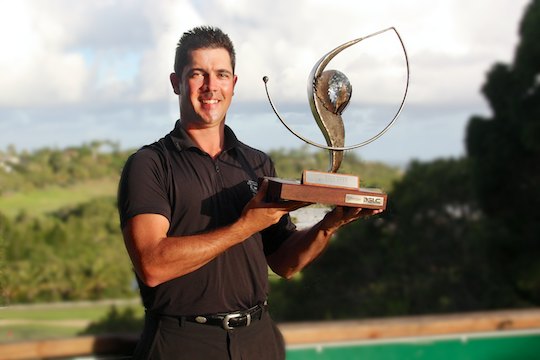 Regaining his composure Stephens went on to shoot 1-under the card today for a tournament total of 15-under 269.

“I had a three putt bogey on the first, but it was probably a good thing, it really woke me up and focused me on the next eight holes,” said Stephens.

“I played my C grade game today but managed some A grade scoring, I hit a couple of loose shots out there but managed my misses really well.”

Throughout the round he held of challenges from many in the field but watched them fade late in the day.

Walking to the 18th with a three shot lead, Stephens went on to claim the title by five shots from Andrew Kelly (VIC), Kota Kagasaki (QLD) and New Zealand amateur Luke Toomey who each finished on 10-under 274.

“I tried not to look at the leaderboard during the round, but it was hard,” added Stephens.

“I stuck to my process and tried to give myself birdie opportunities on every hole.”

This is Stephens’ first victory on the PGA Tour of Australasia and provides the 26-year-old with a number of career benefits.

As well as the winner’s cheque of AU$21,000 and Official World Golf Ranking Points, Stephens is now exempt onto the PGA Tour of Australasia for two years and will tee it up in Australia’s biggest events this summer where in excess of AU$5.7million is on offer.

“I didn’t have any expectations this week. I was just going out there to play golf,” said Stephens.

“I have been working pretty hard physically and mentally the past two years, so this means a lot.”

New Zealand amateur Luke Toomey was pleased to have finished runner-up and leading amateur after missing the cut at the South Pacific Open Championship in 2013.

“To come here and shoot some good numbers and finish second is very encouraging.”

“This is a golf course that demands confidence, which was a goal of mine at the start of the week.”

“Last year I didn’t play with any and it punished me. So the biggest thing I have learnt is that confidence is key.”

Rounding out the top-5 at the South Pacific Open Championship on 9-under 275 were Benjamin Clementson (NSW), Jason Scrivener (WA), Peter Lee (NZ) and Daniel Valente (VIC).