The 2010 Australian Amateur champion secured a 2&1 second round victory over Belgium’s Thomas Detry to set up a third round encounter against Spain’s Emillio Cuartero. 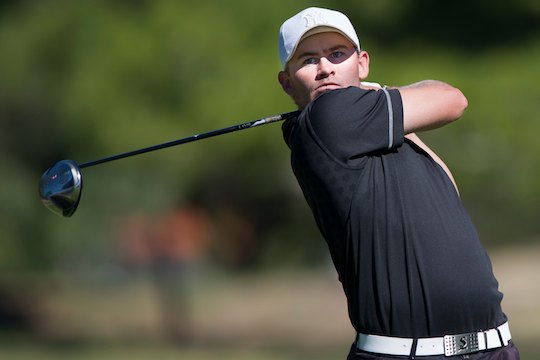 Matt Stieger is positioned well to progress to the round of 16 at the British Amateur championship being played at Royal Troon (Photo: Anthony Powter)

Cuartero, ranked 302nd in the world, has a tied 3rd finish at the Spanish Amateur as his best international performance. Stieger has the experience and form to take this match out and should progress to the round of 16.

Other Australians to progress through to the top-32 include Daniel Nisbet, who disposed of England’s Craig Hinton 2-up in the second round and Jordan Zunic, after he secured a 1-up victory over France’s Adrien Saddler.

Zunic continues to display excellent form having made the cut in every event he has entered in the UK, including a top-10 finish at the prestigious St Andrews Links Trophy.

Aussies not progressing to the third day included Nathan Holman after Italy’s Lorenzo Scotto disposed of the 2012 Master of the Amateurs champion, 2&1.

Daniel Bringolf was another casualty losing his match against Portugal’s Pedro Figueiredo on the 19th, Todd Sinnott fell to France’s Antonie Schwartz, 4&3, and number two seed Geoff Drakeford was no match for Will McCurdy from the USA, losing his match 8&7.

Early news of the day focused on England’s Craig Hinton after he pulled off a surprise upset when he defeated Daan Huizing.

Dutchman Huizing entered the championship as the highest ranked player in the field at number five in the world. Huizing had high expectations after winning the Lytham Trophy by 11 shots and the St Andrews Links Trophy by 14.

Nisbet will play Hinton in the round of 32 and is positioned in the top-half of the draw so he could potentially meet Stieger in the round of 16 should he account for the Englishman.

Zunic is in the bottom half of the draw and should he win his third encounter against Figueiredo, he will face off either Austrian Matthias Schwab or Solvenia’s Tim Gornik.