Earlier this week, the 22-year old Sydney golfer muscled his way from five shots behind heading to the final round to shoot a 66 and capture by three strokes the Ras Al Khaimah Classic in Ras Al Khaimah – one of the seven Emirates that comprise the United Arab Emirates. 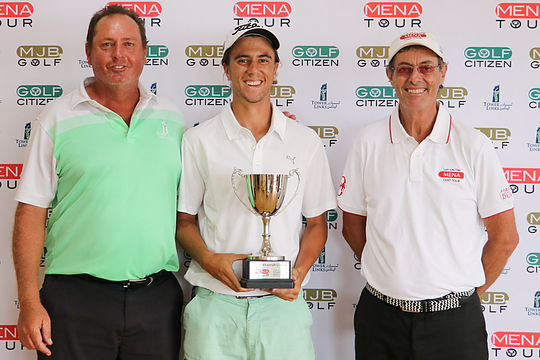 Stojanovski lit up the back nine with six birdies and just one bogey after making the turn at one under to finish at 13-under as the English duo of Andrew Marshall and Jamie Elson shared second on an eventful day at Tower Links Golf Club.

Stojanovski, who has competed on the Asian Tour and the secondary European Challenge Tour and teed-up as the World No. 1895th ranked golfer, becomes the 40th different winner from 18 different countries in the 59-tournament history of the MENA Tour.

In contrast, it was a horror final day for England’s overnight leader Daniel Owen who carded a head-scratching 10-over-par 82 that left him in a tie for 23rd on two-under, bringing back memories of a similarly spectacular collapse by his fellow Englishman Jake Shepherd, who also blew a five-shot lead, incidentally in the same tournament in 2011.

However the day belonged to Stojanovski, who represents the Cabramatta Club in south western Sydney.

“I am really delighted to win for the first time on the MENA Tour. I played some solid golf and I’m really pleased to get the job done,” he said in receiving the winner’s trophy from Simon Payne, general manager of Tower Links Golf Club.

“I started off okay, but finished strongly. My short game was quite good and I holed some nice putts when I needed to. Overall, just kind of everything fell together,” said the Australian, whose previous best finish on the MENA Tour being a top-six at the 2014 Ras Al Khaimah Classic.

England’s Josh Walsh and Germany’s Georg Schultes matched Marshall’s best score of the tournament to climb up the leader board as Welsh ace Stephen Dodd, who started the day in a tie for second, settled for tied 13th on five under after a final round 74.

Walsh joined fellow Englishmen Max Williams and Stuart Archibald for a share of fourth on nine under while Schultes finished in a three-way tie for seventh a further shot adrfit.

England’s Todd Clements comfortably kept up his dominance in the amateur division, carding a tidy 68 to finish on seven-under to beat his nearest challenger Tiago Lobo of Brazil by a good five shots as Sam Hobday, who also returned a final round 68, settled for third a further shot back.

Next up on the MENA Tour is a three-event Thailand swing that gets under way with the MahaSamutr Masters at Banyan Golf Club on May 2.

An initiative of the Shaikh Maktoum Golf Foundation, the MENA Golf Tour was created in 2011 with the aim of developing golf in the region. It is affiliated with the R&A, the worldwide golf governing body based in the home of golf, St Andrews, alongside the Arab Golf Federation and Official World Golf Rankings.