Stolz back in the winner’s circle on Legends Tour

Andre Stolz has claimed his first major PGA Legends Tour event at the 2020 Australian PGA Seniors Championship with a three-round total of 9-under and four stroke win over Peter Lonard at Richmond Golf Club in Sydney.

Stolz, 50, joins Michael Long, who won in 2018, as one of a list of players to have claimed the coveted Australian PGA Seniors Championship trophy in their first year playing on the PGA Legends Tour. 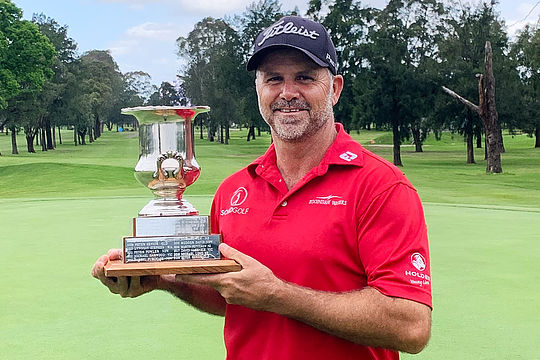 “It was great playing with O’Malley and Lonard, they are old buddies of mine and you know they’re not going to hand it to you so it was nice being able to get on top of them,” said Stolz.

“I have been playing some great golf despite the unlucky break on 9 and maybe a wrong club on 15, but I always felt like I was in control which was good enough to keep them at bay.”

“It’s been a long time. It’s interesting, normally when I play pretty good and get myself in contention like that I can sort of get the job done and I’ve done it a lot in the past but it’s been so long since I’ve won anything.”

In 2003, Stolz won the LaSalle Bank Open on the Nationwide Tour and finished 13th on the money list, earning his PGA Tour card for 2004. On the PGA Tour, he won the 2004 Michelin Championship at Las Vegas with a stroke victory over Tag Ridings, securing his card through 2006.

Stolz has five PGA Tour of Australasia wins including the 2000 ANZ Tour Championship.

Former champion Peter Fowler and Peter O’Malley rounded out the top five with a tie for fourth place at 3-under the card.