Stolz back with Indonesian PGA win

Andre Stolz, who came out of retirement just two years ago, recorded an emotional triumph in the US$1 million Indonesia PGA Championship today. 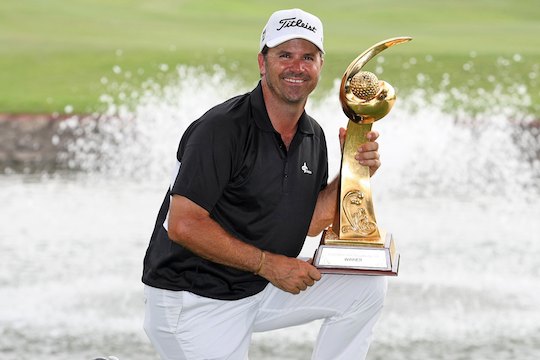 Overnight leader Rory Hie from Indonesia carded a 72 to finish alone in second place one shot behind Stolz at Imperial Klub Golf.

New Zealander Gareth Paddison and Park Eun-shin from Korea finished one stroke further back in the season-opening event on OneAsia.

Local fans were disappointed that 22-year-old Hie was unable to close the deal but they were delighted to see Stolz win after having a torrid time in recent years.

Stolz was one of his country’s finest players before a wrist problem had a profound effect on his career.

He has won one title on each the US PGA Tour, Nationwide Tour, and Japan Tour plus tasted victory four times on the PGA Tour of Australasia.

However, in 2005 a nagging wrist injury caused by wear and tear forced him into retirement for nearly three years. He gradually started to play again and rejoined the Tour in Australia in 2008.

In 2009 he won the Victorian PGA Championship but his win this week, worth a cool US$180,000, emphatically announced his return to the top flight.

“A couple of years ago I thought I would never play again and now I am standing here with a trophy for a US$1million event. It will take some time to sink in,” said Stolz, whose wife Cathy was caddying for him.

Stolz won the 2004 Michelin Championship in Las Vegas on the US PGA Tour and more victories were expected to come until his injury.

“I had to completely remodel swing. The second half of last year I started to play really well and this week I played great but the putter was misbehaving,” added the Australian, who turned professional in 1992.

His putting came good at the correct time though when he rammed in a 35 foot birdie putt on 17 and holed an eight footer for birdie on the last.

Hie, playing in the final pairing behind Stolz, also birdied the last two holes but he lost his chance of winning when he bogeyed the 10th, double bogeyed the 11th and bogeyed the 12th.

Hie played for the University of Southern California and at one point was ranked sixth best amateur in the world. The talented golfer attended college for two years and then opted to leave prematurely as he felt he was ready for the professional game.

The next event on OneAsia is the Volvo China Open at Luxehills International Country Club from April 21 to 24.