2009 champion Andre Stolz is set to return to professional golf when he tees off tomorrow at the Victorian PGA Championship at RACV Cape Schanck Resort.

The PGA Tour winner and 5-time Australasian PGA Tour winner is making an unexpected return to tournament golf following a wrist injury in 2014 that knocked him out of the game for the past half a decade. 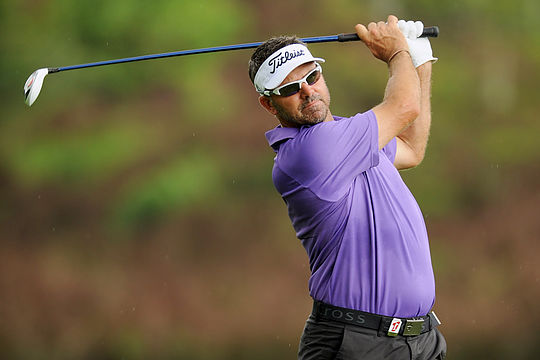 “At the start of 2014 I had wrist surgery…I tried to practice after that for a little while but gave it away,” said Stolz.

“It’s been pretty much four and a half years but about five or six weeks ago I randomly started wanting to play golf again so I went and hit a few balls and played a couple of pro-ams then I thought I was going alright.”

“I’m still a bit rusty but I feel like I’m getting better every week since I’ve been playing, I’m just going through the process now of remembering what to do out there. I’m enjoying the challenge of trying to figure it all out again.”

At 48-years-old the obvious question on everyone’s mind turns to a possible tilt at the Champions Tour in the US joining the likes of Steve Elkington, Rodger Davis, Peter Senior and others before him.

“I honestly hadn’t thought about it (the Champions Tour) when I started six weeks ago, golf is such a tough game. But I love the challenge and the fight it presents to you, so I’d be pretty dirty on myself if I didn’t at least come out and play and see if I can re-ignite my interest for the Seniors Tour.”

“In America it’s so tough to get on that Tour through Qualifying. Being a previous winner over there I’ve sort of got a few leg-ups, I can get to the finals of Q-School, but this is all information I’ve just found out in the last couple of weeks because I honestly wasn’t even looking at it.”

One of the lasting legacies of Stolz’s time on the TPC (Tournament Players Council) is PGA TV, the PGA of Australia’s live streaming platform which was officially launched during the 2017 Victorian PGA Championship and will broadcast the final two rounds live from RACV Cape Schanck Resort this week.

“I was probably one of the first guys on the TPC to push it through; the other guys on there all knew how strongly I felt about it so we all made a big push.”

“It creates great value for money for the sponsors of these events; they’ve been putting in a lot of money over the years.”

“As soon as I realised the internet was going to be fast enough for live streaming I thought we’ve got to get on to this I’d love to have the whole Tour on PGA TV.

“I’m really glad the PGA found the way to finance it, it’s a great thing and gives the sponsors much better value for money than in the past. I’m stoked we’ve got it over the line. Hopefully we can keep growing the audience and improve the telecast as we go and throw some more money at it.”