Fresh off a win at the QLD Senior PGA Championship, Andre Stolz has notched up another victory but this time he was forced to share the spoils with Peter Senior at the Sunshine Coast Masters.

With six players, including Stolz and Senior, sharing the overnight lead at Twin Waters Golf Club, the tournament was wide open with just 18 holes to play. 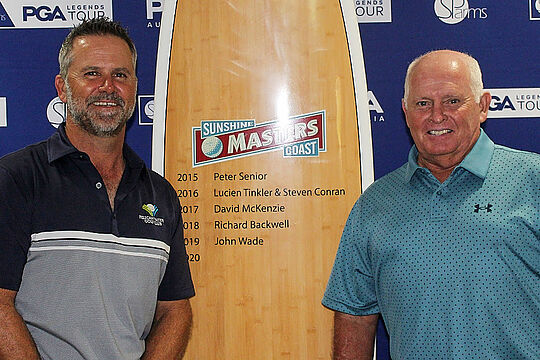 However, the ever-consistent Senior took the reins and looked like being unstoppable before a poor shot on the final hole left the gate open for Stolz, who nailed a heart-stopping eagle at the 18th to force an up and down from Senior for par.

The 62-year-old Senior pulled out all stops to make par from a greenside bunker and tied the tournament alongside Stolz on 8-under par after both players finished with back to back rounds of 4-under 68.

“Peter hit his second shot on 18 in the bunker and I thought, This is my chance to eagle and get a win,” Stolz told PGA Australia.

“I managed the eagle but the champion that Peter is, made his par to tie.”

It was Senior’s second title at this tournament having won the inaugural staging back in 2015.

Brad Burns finished runner-up behind Stolz at the recent QLD Senior PGA Championship and took bridesmaid honours again finishing five shots off the pace at 3-under along with New South Welshman, Grant Kenny.