Andre Stolz has taken out the Queensland Senior PGA Championship with a two stroke victory over Brad Burns at the Maroochy River Golf Course. 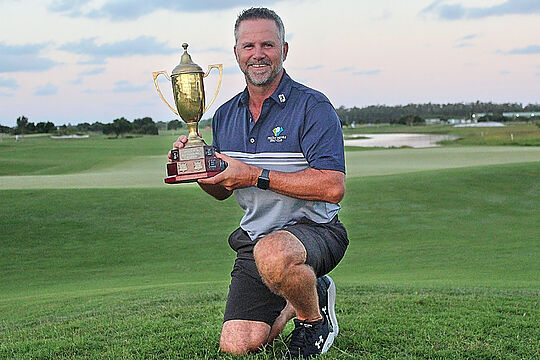 Stolz began the second round three strokes behind day one leader Richard Backwell only to fire the tournament low final round in challenging conditions to make up the shortfall.

The victory takes Stolz’s winning tally to six senior Australian tour events and sees him atop the Legends Tour Order of Merit.

“Extremely happy with this win as it was a real battle out there but proud of how I held it together,” said Stolz.

“I did not have a bogey today in that wind and with greens quite quicker than yesterday.”

In 2003 he secured a win on the Japan Golf Tour at the Token Homemate Cup which added to his five wins on the PGA Tour of Australasia, the most recent being the 2013 South Pacific Open Championship where he defeated Michael Wright in a playoff. Stolz recorded a career high world ranking of 53 in 2003.