Wright and Stolz finished regulation play in Noumea tied with a 16-under par score of 268. The pair played the 18th hole at Tina Golf Club five times before Stolz emerged the champion. 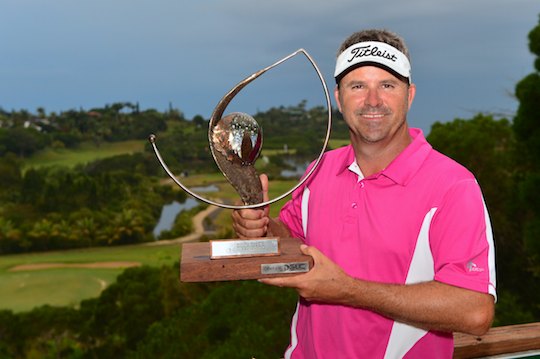 “I am relieved more than anything,” said Stolz.

“I have had some good opportunities to win tournaments this year and have just been messing them up.”

Staying calm throughout the playoff was the key for Stolz who made par on the treacherous 342 metre par-4 18th hole to seal the title.

“In golf I try to take it one shot at a time. Basically nothing was going through my mind,” added Stolz, who switched clubs for his fifth tee shot.

“In the first four holes of the playoff I hit a three iron off the tee. I kept ending up between clubs for my shot into the green”

“I thought if I hit the same club I would have the same problem. I went an extra club to get a further 10 yards and that paid off.”

Stolz played consistent golf throughout the tournament with rounds of 67, 66, 69 66 to claim his first victory since 2011 Thailand Open.

“It’s good to finally have a win. To remind myself that I can get the job done when I need to.”

“We can all play the game when there is no pressure on, but when you get those tough shots that’s the difference between winning and losing.”

Throughout the playoff Michael Wright was consistent, making four consecutive pars before finding the left lateral water hazard on the 18th to seal his fate as runner-up.

“I had been stripping my three iron all day as well as four times in a row in the playoff,” said Wright.

“But on the fifth tee shot I had a bad swing, turned it over a little and the ball kicked left in to the hazard.”

“I’m quite disappointed at the moment. Especially after going through five holes of the playoff. But I will look back on this as a great week and a great learning experience.”

Victorian Matthew Griffin finished in outright third place on 14-under the card. In the past three years Griffin has recorded first, second and third place finishes at the South Pacific Open Championship.

A further shot back was New South Welshman Chris Campbell and rounding out the top-5 was Tasmanian Clint Rice and Brett Rankin on 12-under the card.

The PGA Tour of Australasia will now head to Kalgoorlie in West Australia for the WA Goldfields PGA Championship.