After a nightmare finale to his 2016 season, Graeme Storm has begun 2017 in triumphant manner beating Rory McIlroy over a three hole play-off to capture the BMW SA Open hosted by City of Ekurhuleni.

It was 84 days ago Storm bogeyed the last hole in Portugal to lose his European Tour card by just €100. 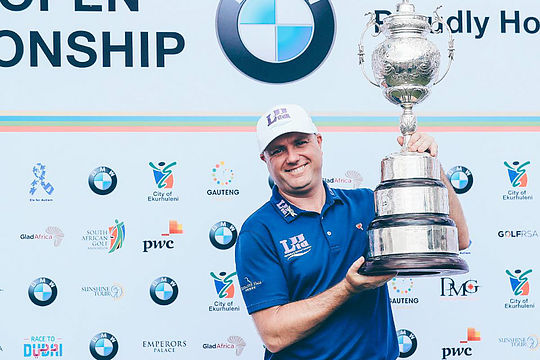 Thanks to Patrick Reed not completing the mandatory number of events, the Englishman was reinstated and grasped his chances this week with both hands to win for only the second time in his career after capturing the 2007 French Open.

Storm hit his approach to the heart of the 18th and made his par three times in the play-off, with McIlroy missing the green at the third attempt, leaving himself an eight-foot putt for par that missed on the low side.

The 38-year-old had entered the final day with a three-shot lead and got to 18 under with a closing 71 but McIlroy reeled him in with a 68 to set up the dramatic finale.

Englishman Jordan L Smith finished a shot out of the play-off after a 68, with Dean Burmester at 15 under, a shot clear of fellow South Africans Thomas Aiken and Trevor Fisher Jnr.

The win is Storm’s second on the European Tour and first since the Open de France ALSTOM, nine years and 198 days, and 274 events ago.

“I am speechless. It’s been incredible and I can’t quite believe it,” Storm said.

“This is a dream come true, especially after what happened to me last year with my card and everything. I really took a lot from that experience and told myself to try and grasp the opportunity of getting my livelihood back with both hands and I have done that this week.”

“I have been to hell and back to be honest with you. It’s been an absolute rollercoaster over the last year and a half – especially the end of last year.”

“There was pressure today but not the same pressure as trying to keep your European Tour card. That’s real pressure and something I don’t want to feel for a long time.”

McIlroy was playing the event for the first time since 2009 after being drawn to Gauteng by tournament host and great friend Ernie Els, and the huge crowds that flocked to see him and the rest of the field on Sunday were treated to a wonderful spectacle.

“Obviously it’s disappointing to finish like that but Graeme has played well all week and what a story it is for him,” said McIlroy.

“He thought he had lost his card at the end of last year and there he is now standing with a trophy in his hands after the first event of 2017. I’m delighted for him.”

“I wish I could have done a little more but it’s not a bad way to start the season and gives me something to build on in the weeks ahead.”

Brett Rumford was the only Australian in the field and missed the cut by one shot.

The European now moves to the UAE for the Abu Dhabi HSBC Championship where Dustin Johnson will make his debut and Rory McIlroy will be looking to win his first title at this event.