In what has to be a rare first, the final round of the 2021 Northern Trust will now take place on Monday – 23rd August (US time).

There will be no play on Sunday for all 75 players who made the second round cut due to the prediction that tropical storm Henri is set to strike the New Jersey & New York City region.

Aussie Cameron Smith who went within one putt of shooting a round of 59 before holing out for a 60, to grab the third-round clubhouse lead on 16-under par, remarked:

“I haven’t been in that situation before. It was completely new to me. I mean, I just tried to get up there and do what I did the rest of the day, hit a good drive, and my driver definitely put me in that spot today for all those birdies.”

“It’s been a bit of a rough trot with the driver of late. I felt like it’s got away from me a little bit, and it was nice to see a lot of drives, a lot of good drives today.” 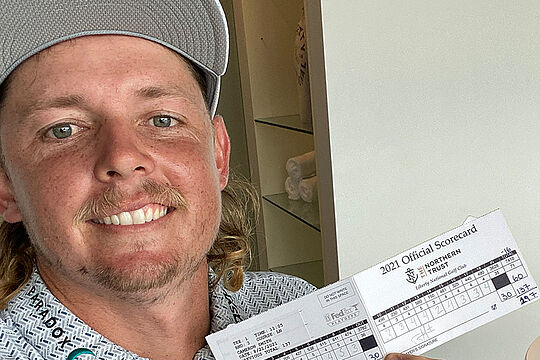 “I always think it’s hard to back up a really good round, so maybe the day off will help me out.”

“I don’t know what I’m going to do tomorrow. I’ll probably just a little bit of a rest. A round like this usually takes it out of you a little bit, the adrenaline, the highs and the lows. Sleep in. Maybe a little bit of gym and come out Monday firing.”

Smith says the lowest round he can recall shooting was a 62 at Wantima Country Club, his home club in Brisbane.

Smith will tee off alongside co-leader and World No.1, Jon Rahm, on 16-under. The Queenslander is projected to move to second place in the FedExCup should he win on Monday.