Strafaci comes from a long line of amateur golfers. His father, Frank Jr., who was on the bag this week, was an accomplished amateur player and competed in three US Amateurs, making match play once. 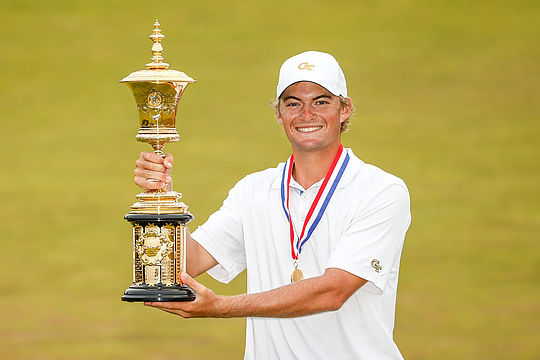 But it was Tyler’s grandfather who played 16 US Amateurs, reaching the quarterfinals in 1947 and 1949, and then giving Arnold Palmer his best shot in the first round in 1954 before falling to the eventual champion on the final hole at Country Club of Detroit.

The quality of the golf was outstanding with the two finalists combining for 25 birdies and one eagle, with the usual match-play concessions.

With the triumph, Strafaci automatically makes the American Walker Cup team for the matches against Great Britain & Ireland next May at Seminole Golf Club in Strafaci’s home state of Florida.

“I always wanted to be the first Strafaci to make a Walker Cup…and now that I’m on that team, I feel like I’ve made him proud, and I feel like it’s just unbelievable,” said Strafaci, who earlier this summer won the North and South Amateur.

Osborne started in the morning 18 on fire with three consecutive birdies, two of which won holes 1 and 2 and moving his margin to 5-up with birdies on Nos. 10, 11 and 12.

Strafaci then dug deep winning No. 13 with a birdie, then 14 with a metre birdie putt and 15 with a 3 metre par putt. Then a 2 metre birdie on 17 trimmed the deficit to one hole, and when both players birdied 18, the morning round ended with Osborne holding a narrow 1-up lead.

Strafaci continued the form through clutch putting early in the afternoon round and at the par-3 33rd, Osborne over clubbed and missed the green long and left into the penalty area. It took him three shots to get to the putting surface and he eventually conceded Strafaci’s par putt.

But just like he had done in each of his previous three matches in advancing to the final, Strafaci won the final hole after Osborne missed the green right, left his chip about 3 metres short and missed the putt.

“It’s crazy. I’m not going to lie; it’s stressful. Winning the Am is amazing, but winning four matches in a row on 18, that’s something I’m always going to look back on and say I’ve done this before, I’ve done it on the biggest stage in amateur golf.”

Jack Trent was the only Australian to make it past the strokeplay section of the event before going down to Cameron Sisk 3&2 in the Round of 32.