Robert Streb has pulled a rabbit out of the hat to salvage his second RSM Classic title in a playoff and deny Kevin Kisner another title at the Sea Island layout.

Streb, who lead by three shots coming into the final round, didn’t do much wrong but when those behind you are firing 62’s and 63’s, it’s tough to keep your head above water.

To his credit, the 33-year-old did just that with a tournament-saving 6-iron to inside four metres at the par 3-17th for birdie, which allowed him to sneak home with a 2-under 68 and finish alongside Kisner, who could only manage to par his last three holes.

The pair headed to the par-4 18th with both players recording pars but it was Streb, who got the upper hand on the second trip down the 18th.

After putting his tee shot in the fairway rough, he fired a superb 150 metre wedge to land on the green and roll over the left-hand side of the cup leaving a foot long putt for victory. Kisner, who was lying off the green, went too hot with his chip and it was left to Streb to sink the winning birdie putt. 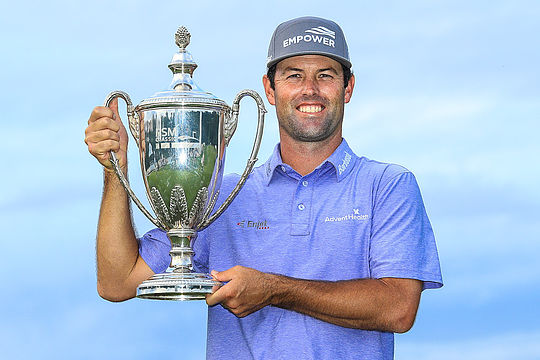 “It’s really nice to say I’ve got more than one [win],” said Streb, who won here in 2014 when it was known as the McGladrey Classic. “Winning more than once…validates what ability you have. It was just kind of unexpected and super nice to get.”

“It was a bit of a struggle today at times. I was pretty solid but then kind of lost it for a bit…but I just hung in there and fortunately no-one got too far away.”

What’s In The Bag: Robert Streb

Cameron Tringale moved up from 11th place to secure outright third on 18-under following a 8-under 62 while seven-time European Tour winner, Bernd Wiesberger (63) and Andrew Landry (64) shared 4th place another stroke back.

Streb’s victory marks the fifth time in the 2020-21 season that a winner has come from outside the top 300 in the world. He now moves from 380th to 116th and has a two-year exemption on the PGA Tour and will return to the Masters for the first time since 2016 where he missed the cut.

Jason Day carded a final round 65 to move into a share of 12th place while Matt Jones and Aaron Baddeley shared 44th and 57th respectively.

The PGA Tour now moves south for the Mayakoba Golf Classic in Mexico starting on December 3.