Robert Streb prevailed over Brendon de Jonge on the second extra hole to win his first PGA Tour title at the McGladrey Classic in Georgia.

Streb, playing in just his second year on the PGA Tour, ripped apart the Seaside Course at Sea Island with a final round 7-under 63 to rally from a 5-shot deficit making nine birdies to close the gap before waiting 70 minutes until knowing he’d made the play-off. 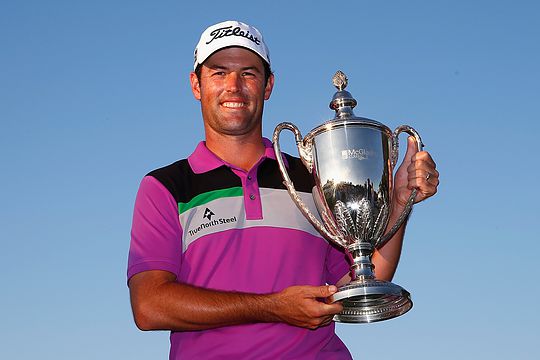 Streb, de Jonge and Will MacKenzie (who exited a three-man playoff with a bogey on the first extra hole, the par-4 18th) all finished 72 holes at 14-under.

With a previous best score on the PGA Tour of 65, Streb beat that by two strokes in a great victory on Sunday earning him not just 500 FedEx Cup points, but also the No. 1 spot in the FedEx Cup standings in the early PGA Tour as well as a berth in the 2015 Masters tournament, the Players Championship in March and the 2015 PGA Championship, the fourth of the PGA Tour majors in August.

A runner-up finish at the Zurich Classic of New Orleans last season was his best finish before this week.

In two previous TOUR seasons, he has ended the FedExCup series in 126th (one spot shy of the Playoffs) and 71st (missing the 2014 BMW Championship by one position).

“I just wanted to keep improving,” said Streb about his win and near misses on tour.

“Honestly I thought I’d made it to the BMW. I thought that putt I holed did it, but it didn’t. You know, I guess it kind of keeps you hungry if you keep getting there.”

“But you know, you’re obviously not going to achieve all your goals right from the get‑go. Well, at least I didn’t.”

Stuart Appleby was the best of the Aussies finishing in a tie for 22nd at 7-under, with Robert Allenby in a tie for 41st position two further behind.