American Kevin Streelman and Denmark’s Thomas Bjorn have taken the first round lead at the ISPS HANDA World Cup of Golf while it was a mixed first day for the Australians at Royal Melbourne Golf Club.

Streelman and Bjorn opened their World Cup campaigns with rounds of 5-under 66, and will lead into Friday’s second round over Stuart Manley (Wales), K.J.Choi (South Korea) and Martin Laird (Scotland) who finished at 4-under par. 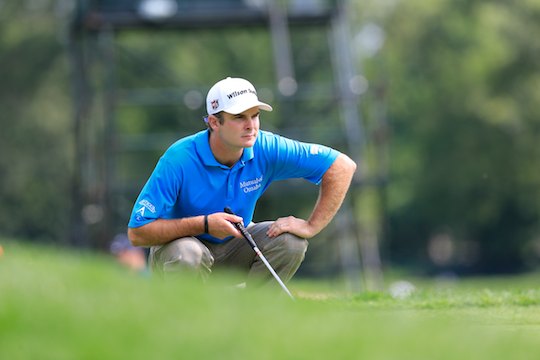 Jason Day shot an opening round of 3-under 68 to finish day 1 in 6th position, keeping Australia’s hopes high after a disappointing first round by Adam Scott.

But it was Streelman who turned heads at Royal Melbourne on day one, the 35-year-old at one stage holding a two shot advantage over the field.

“I was very pleased with that start. It’s just an incredible golf course,” said Streelman whose strong year on the PGA TOUR was punctuated by a win at the 2013 Tampa Bay Championship in March.

“It’s a treat to play. I really love it and was able to keep the ball below the holes. Some of those pin positions were rather difficult and it is a course you have to be so careful on and I was able to put the ball in the right position and make some really nice birdie putts and also some par saves as well. So it’s a nice start.”

Tied for the lead with Streelman, 42-year-old Dane Bjorn was likewise pleased with his opening round of 5-under 66.

Despite a shaky start where he four-putted the 4th hole, Bjorn had nothing but praise for the famed Royal Melbourne layout.

“This golf course in itself is fantastic but the condition of it is just perfect because it just demands so much of you. Anything in red numbers on this golf course on any day is good,” said Bjorn.

While Bjorn’s love of Royal Melbourne was clear to all, he says it was his friendship with teammate Thorbjorn Olesen that lured him ‘Down Under’ to the ISPS HANDA World Cup.

“(Thorbjorn) asked me earlier in the year if I would play in this event and I haven’t played the World Cup for a while and I wanted to play because it was him,” Bjorn said.

With conditions becoming increasingly difficult as the afternoon progressed, Queenslander Jason Day was pleased with his opening round of 3-under 68.

“I think the biggest goal today was just to try to stay patient,” said Day, who has not played for five weeks.

“You have got to come in with a happy attitude and understand that you have had five weeks off, don’t really expect too much but go out there and give every shot a hundred per cent.”

“I’m very happy with shooting three under. It’s a good position going into the next three days and just got to chip away at it.”

Whilst off to a promising start, Day’s teammate Scott fared much worse on the opening day, a nine on the par-4 12th hole bringing his early momentum to a halt.

“It was a little disappointing to do that but stuff can happen and that’s why when you play good tracks like this you need to be switched on at all times and I paid the price today,” reasoned Scott who was still positive about his ability to deliver a solid overall result.

“It is going to play tougher and tougher and I don’t think scores are going to be that great. So I think if I can plug away at it I will maybe claw my way back into it.”

In the teams competition Denmark and the United States share the overall lead, three strokes ahead of Portugal.

Scotland, Canada and South Korea are tied for fourth position.

Australia is tied for eighth position.