Steve Stricker won the Senior Players Championship on Sunday at Firestone Country Club in Akron for his second victory of the year and third major title.

A twelve time winner on the PGA Tour, Stricker’s win now takes his PGA Tour Champions win total to seven have recently won the Cubb Classic in April this year. The 54-year-old Stricker also earned a spot in The Players Championship at the TPC Sawgrass next March. 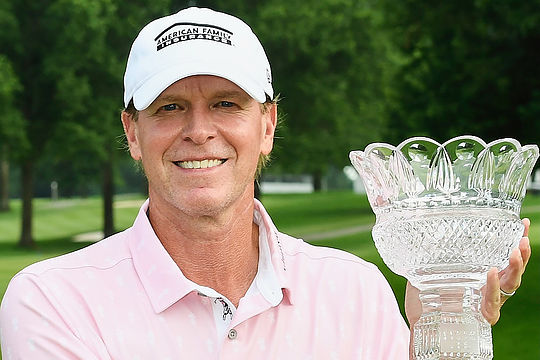 A final-round 70 on the arduous South Course produced a record six-stroke victory over Jerry Kelly, the defending champion as Stricker completed the 72 hole events in 7-under-par to join Arnold Palmer and Bernhard Langer as the only wire-to-wire winners of the event.

The US Ryder Cup captain opened with a 63, shot 68 in the second round and 72 in the third.

“It was a tough day, but it’s worth it in the end, I guess, when you can gut it out and walk away with a win,” said Stricker.

“This one means a lot because I had the lead in the other two majors this year and didn’t win, so I felt a lot of pressure here this week.”

“I knew I hadn’t been really shutting the door on the guys when I have the opportunity, so that played into my mind, too, a little bit, which made things more difficult. So it was good to kind of step up and hit a couple shots when I had to today.”

Fred Couples shot a 67 to tie for third with David Toms at even par. Ernie Els was fifth at 2-over. Jim Furyk was another stroke back.

Rod Pampling fired a closing 70 to move six places up the leaderboard to finish the best Australian in a share of 7th position at 4-over-par, 11 shots behind the winner. John Senden also made an impressive final day move moving 13 places with a 71 to finish in a share of 42nd position.