It’s all fun and games until the adults step in and spoil the fun. And it looks as though that might be happening sooner rather than later according to Ryder Cup captain, Steve Stricker.

Team USA have lost seven of their last nine meetings with the Europeans so the ongoing feud between two of its biggest stars – Brooks Koepka and Bryson DeChambeau – just months out from the event is not ideal. 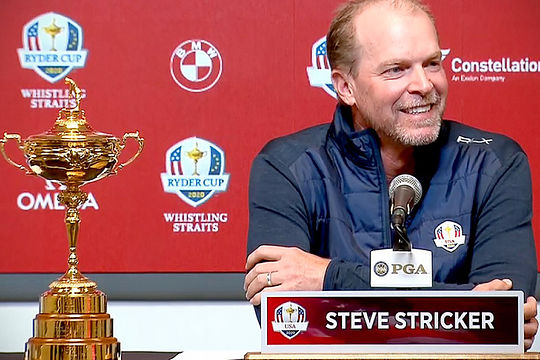 “Yeah, it’s not making my job any easier, you know?” said Stricker in an interview with Wisconsin Golf’s Gary D’Amato.

“I haven’t talked to either one of them. I will have to at some point. We’ll see where it goes from there. Hopefully, they can put their differences aside for the week, be big boys and come together as a team.”

To make matters worse, this year’s Ryder Cup will take place for the first time since 2018 from September 21-26 at Whistling Straits, Wisconsin – Steve Stricker’s home state. So the pressure will be on the 54-year-old to deliver a victory in front of what will be a parochial crowd.

Four-time major champion, Koepka, of course, has a different view.

“I don’t see why it would [affect the team]. There’s only eight guys that are playing (in foursomes and four-balls). Four guys are sitting. I play with one other guy.”

“Let’s say I don’t play with Bryson or Bryson doesn’t play with me. He takes care of his match and I would take care of my match.”

“I don’t know how that has any effect. What you do off the golf course doesn’t have any effect on the golf course,” he said when asked about the situation ahead of this week’s PGA Tour tournament.

Golf is an individual sport and Koepka is free to think what he wants but that may well change when confronted by Captain Stricker and rightly so.

DeChambeau sits at No.2 on the Ryder Cup points list with Koepka falling into 5th place following Collin Morikawa’s runner-up finish at the recent Memorial Tournament.