Steve Stricker won the Ally Challenge for ninth PGA Tour Champions victory on Sunday, shooting a final round 67 to win by a shot at 15-under-par over Brett Quigley.

Quigley finished with a 68. Jeff Maggert was third at 13-under after a 65. Padraig Harrington, in the position for a second consecutive Champions Tour win, shot 70 in the final round and finished tied for fourth place with Scott Dunlap. 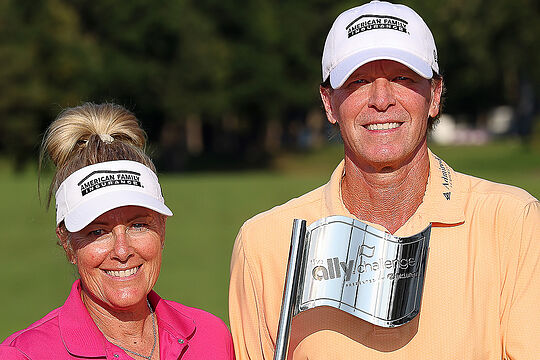 “I didn’t play that well early on and I told (wife/caddie) Nicki, I’m like, `We’ve just got to be patient and just keep plugging along,’” said Stricker. “It was a little bit of a different day, it was windy, it was a little bit harder, I thought.”

“Then I had that stretch of four holes where I made four [birdies] in a row and that was the difference. I just kept plugging.”

Stricker also won the major Regions Tradition in May in Alabama.

Rod Pampling finished the best of the Australians in a share of 6th position at 11-under-par, with David McKenzie in a share of 33rd. Stuart Appleby finished at 2-under and for a share of 48th with John Senden in equal 57th and Robert Allenby in a tie for 71st.