Steve Stricker closed with a 3-under 69 for a two-shot victory in the Constellation Furyk & Friends and his fourth PGA Tour Champions title this year.

Stricker finished at 4-under in winning for the third time in his last four outings and took home US$300,000 to move to No. 3 in the Charles Schwab Cup behind leader Steven Alker, who did not play this week, and Padraig Harrington. 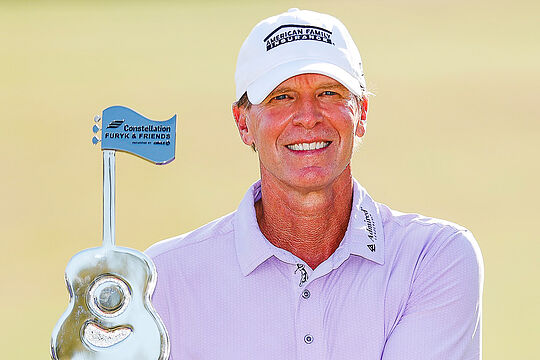 The 55-year-old missed only two fairways, birdied all four par-5s (he was 12-under on those holes for the week) and bogeyed only the final hole after an uncharacteristically poor approach shot.

“I felt like if I could go around here and not make a bogey today and take care of the par 5s – birdie two or three of them – shoot 3-under par or 4-under par, it was going to take a really special round” to beat me,” said Stricker.

“I didn’t know what to expect coming out this season at all, so it’s been a lot of fun.”

Stricker has played stellar golf since winning the Regions Tradition on May 15, his fourth Champions Tour major. He’s finished among the top-three in seven of 10 starts, and in the last six weeks, he’s won three times and finished third in four starts. His scoring has been in the 60s in his last 11 rounds and has a scoring average of 67.0.

Stricker joined the PGA Tour Champions in 2017 and, in his first event, finished one stroke behind winner Tom Lehman at the Tucson Conquistadores Classic. Since then he has amassed 11 PGA Tour Champions tournament wins to add to this 12 PGA Tour titles.

John Senden finished the best of the Australians in a share of 49th position with Robert Allenby in 57th. Rod Pampling shared 63rd position and Stuart Appleby finished in 76th position.