Steve Stricker won his second straight PGA Tour Champions event on Sunday, closing with a 6-under 64 and beating Sweden’s Robert Karlsson with a birdie on the first playoff hole in the Sanford International. 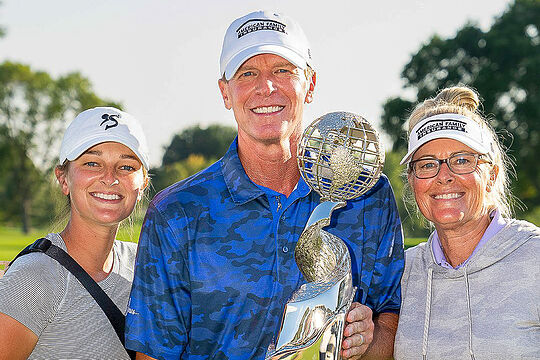 The 55-year-old started the final round behind leader Jeff Maggert by two shots before posting a second straight round of six-under-par 64 to complete 54 holes in 14-under. Karlsson, playing behind Stricker, birdied 16 and 17 to get into a tie with Stricker, then made a par save at 18 to force a playoff. Stricker made quick work of the playoff with a birdie on the first extra hole, the par-4 18th.

“You’ve just got to stay aggressive at times out here and I was doing that,” said Stricker. “I did a good job of that today and hit a lot of good putts. That one on the playoff, it was a special putt, that was really cool to do.”

Stuart Appleby finished the best of the Australians in a share of 16th position with a final round 65 moving him sixteen places up the leaderboard.

David McKenzie shared 47th position, with John Senden in a share of 61st position. Rod Pampling rounded out the Aussie contingent finishing in a share 67th.

Stricker moved to third place in the Charles Schwab Cup standings with three tournaments left. New Zealand’s Alker leads the standings with US$2,569,281 followed by Padraig Harrington at US$2,471,903, with Stricker on US$2,173,725.

Rod Pampling is currently the top Aussie money earner with US$1,909,937 and 19th in the standings.