The NSW Open Championship starts tomorrow at Stonecutters Ridge with the tournament’s future secured for the next four years at this magnificent layout.

With manicured greens and lush fairways, the Greg Norman course has been designed to rank among Australia’s top 100. Big hitting plays an advantage with the 18th, 493 metre par 5 finishing hole presenting a real eagle opportunity which sets the tournament for what usually is a dramatic finish. 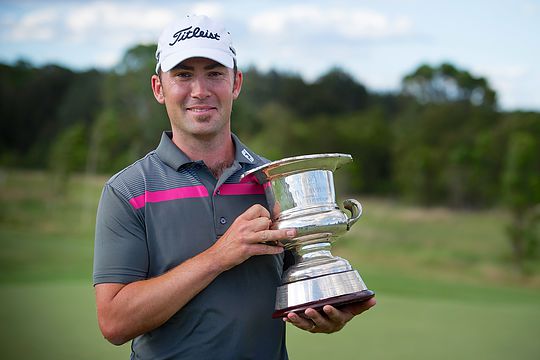 Defending champion Anthony Brown is back and in good form after a recent Pro-Am win (Credit: Anthony Powter)

Last year Anthony Brown secured his first Australasian Tour title after making birdie at the second extra hole on the 18th to defeat New Zealander Josh Geary in a playoff. It was Brown’s first win in 10 years of professional golf.

Brown will return to defend his title having played a few tournaments in China this season and comes off a recent win at the Box Hill Pro-Am a fortnight ago.

“I’m looking forward to defending the Championship. I’ve got great memories of the place. Hopefully I get off to a good start and make a good fist of things,” says Brown.

“Obviously any time you win for the first time you savour and celebrate it,” says Brown. “You always imagine you’re good enough to win, and when it happens it’s a huge feeling of relief.”

Last week’s winner at the WA Open, Daniel Fox has entered as has fellow Western Australian and rookie professional Jarryd Felton. Both are players to watch.

The Championship is played for a minimum prize purse of AU$110,000 the winner also receives Official World Golf Ranking Points and becomes fully exempt on to the PGA Tour of Australasia for the remainder of this season plus a further two years.

Kel Nagle, from which the NSW Open trophy has been renamed the trophy in honour of, Ian Baker-Finch, Peter Lonard, Norman Von Nida, Greg Norman and Peter Thomson are all former champions of the title.

The NSW Open will be held from 12-15 November 2015, as the lead in tournament to the big ‘three’ on the Australian golfing calendar with the Australian Masters, Australian Open and Australian PGA Championship scheduled over the next month.