David Micheluzzi has finished the best of the Australians at the British Amateur held at Portmarnock Links in Ireland making it through to the semi-finals before falling to local James Sugrue, 3&1.

If it was any consolation for Micheluzzi, Sugrue, 22, would go on to win the championship, defeating Scotland’s Euan Walker 1-up in the 36 hole final. 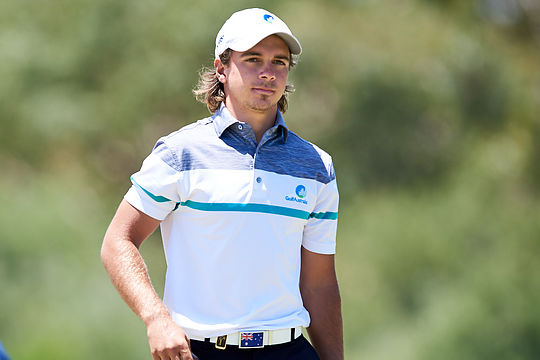 With the win, Sugrue gains starts in next month’s British Open at Royal Portrush followed by next year’s US Masters and US Open.

A contingent of ten Australians competed in the championship with Kyle Michel the top qualifier from the 36 hole stroke qualifying round finishing in a tie for 11th at even par.

Josh Armstrong and Micheluzzi qualified in a share of 29th position at 2-over, with Nathan Barbieri finishing at 4-over and in a share of 57th poison, inside the desired top-64.

Barbieri was the first Australian causality in the elimination match play rounds, going down narrowly in the first round to Sweden’s Ludvig Aberg on the 23rd hole.

The second round had unfortunately two Aussies against each other with Micheluzzi defeating fellow victorian Kyle Michel, 2-up. France’s David Ravetto accounted for Josh Armstrong with a solid 3&1 win to leave Micheluzzi the lone Aussie in the championship.

In the round of 16, Micheluzzi dominated his match against England’s Tom Sloman with a solid 4&3 win to set up a 4th round encounter with Denmark’s Alexander George Frances, which Micheluzzi won 2&1.

In the Quarter final, Micheluzzi was against American Cameron Sisk ranked 203rd in the world and a winner this year on the US Collegiate circuit at the Sonoran Showdow. Micheluzzi, the highest ranked amateur at the championship at 7th, eventually overcame the American to win the match 1-up.

Sugrue was only ever one hole behind Micheluzzi in their semi-final match after the Aussie birdied the opening hole before giving away the advantage with a bogey on the second. At the turn, the Irishman was 1-up, but consecutive bogeys on the 10th and 11th by Micheluzzi had Sugrue 3-up with six to play.

Micheluzzi gained a hole on the 13th after the Irishman conceded before dual birdies on the 14th saw Sugrue 2-up with three to play. From there the Irishman made no mistakes to secure the match and ultimately a place in the finals.

In the championship match, Sugrue certainly thrilled the locals in Dublin moving to 5-up after nine holes against Walker, before the Scotsman made a comeback to all square with two holesto play.

A bogey on the 35th hole the game changer to allow Sugrue the 1-up margin and the title.

“It is hard to believe really,” said Sugrue. “It hasn’t sunk in yet. It’s more relief than anything else really to get over the line, especially after being three up going into the afternoon session. I’m just delighted to do it.”

Sugrue became the first Irish player to win the British Amateur since Alan Dunbar in 2012.