Justin Suh has taken out the 2022 Korn Ferry Tour Championship finishing at 21-under-par to collect his first Korn Ferry Tour win and the No.1 ranking in the season-long points race.

The 25 year-old Suh (Pro V1) gained full status for the 2022-23 PGA Tour season for topping the points leaderboard and is also exempt for the 2023 Players Championship and the 2023 US Open, the first year the exemptions have been on offer at the Korn Ferry Tour finals. 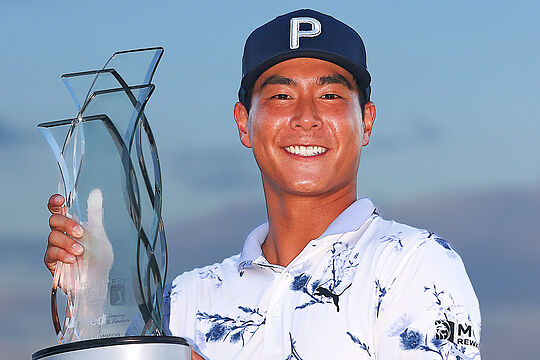 Suh joins World No. 1 Scottie Scheffler (2019) and PGA Tour winner Chesson Hadley (2017) as the only players in history to win both points lists. Suh clinched his PGA Tour card a few weeks ago as one of the Korn Ferry Tour’s top-25 finishers in regular-season points. On Sunday at Victoria National, he improved his status and will have fully exempt status on the PGA Tour next season.

“It’s one of the most important weeks of the year,” said Suh. “I know it’s a lot of stress for guys fighting to get their (PGA) Tour cards, but it’s an exciting week. I’m just really happy a couple of my friends got in.”

“We’ve been close so many times throughout the season. It felt great to prove to myself that I can win.”

The three-event Korn Ferry Tour Finals saw the top 75 players on the Korn Ferry Tour and the players ranked 126 to 200 on the PGA Tour battled it out for the 25 PGA Tour cards for the 2022-23 season, which starts in two weeks at the Fortinet Championship in Napa, California.

The Australian players failed to fire at these finals with Aaron Baddeley the best finishing in a share of 46th position and Jason Scrivener next in a share of 52nd. Min Woo Lee missed the 2-under cut mark along with Anthony Quayle.