Andy Sullivan continued his breakthrough season on the European Tour by becoming the first man to win three European Tour events this season with a superb wire-to-wire victory at the Portugal Masters.

The Englishman came into the final round with a five-shot lead and extended that to nine shots with a commanding final round 66 to finished well clear of playing partner Chris Wood on 23-under. 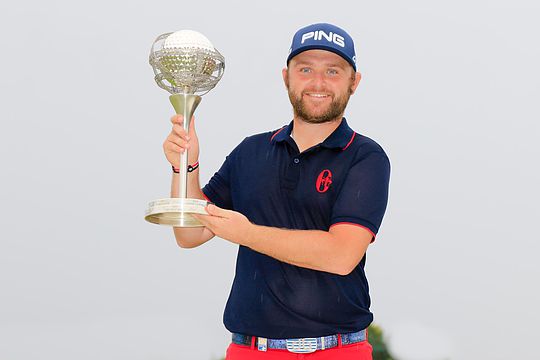 After early season wins in South Africa, the 28-year old became the fifth wire-to-wire winner of the season, and smashed the record winning margin in Portugal which had been established by Alexander Levy, who was the winner last year.

“It’s just absolutely incredible. To lead from day one right through the final day, it’s nothing I’ve ever experienced before so I wasn’t sure how I’d cope, but I think I did alright,” Sullivan said.

“It was a lot harder than I made it look. I knew I needed to keep going, keep pushing, and keep staying ahead. I felt like I never really got to relax until that second shot to the 18th, even though I knew I had a big lead.”

“Golf’s a funny game, you just never know what can happen.”

Wood finished in second place on 14-under par after a final round 68, whilst third place was shared by Eduardo de la Riva, Trevor Fisher Jnr and Anthony Wall.

Australia’s Richard Green came home strongly with a final round 64 to tie for 18th place at nine-under but the day well and truly belonged to the ever-smiling Sullivan, who moved inside the top 50 of the Official World Golf Rankings with his latest victory.

The Hong Kong Open is the last European Tour event before the four-event Finals Series of the 2015 Race To Dubai begins in Turkey.