England’s Andy Sullivan has walked away a surprise winner of the South African Open Championship after defeating out of sorts local favourite Charl Schwartzel in a dramatic play-off.

Schwartzel took a five-shot lead into the final round at Glendower Golf Club and despite an uncharacteristically wayward performance with his long game, still led by four strokes with five holes to play. 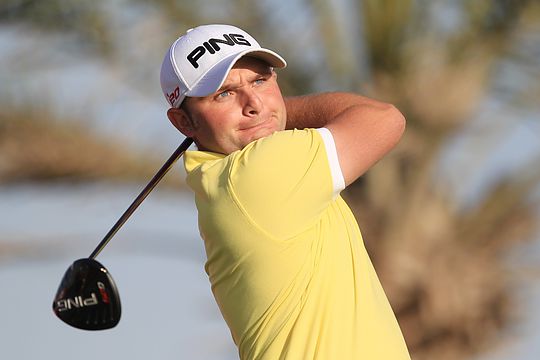 However, the former Masters champion floundered after failing to recover from a plugged lie in a greenside bunker on the 14th and three-putted the 16th to run up a double bogey six.

Another wayward tee shot at the 17th led to another bogey and a final round 74 to Sullivan’s 67, leaving the pair tied at 11-under par.

The players returned to the 18th for sudden-death and, after both had missed the fairway, Sullivan produced a remarkable 9-iron from the trees to 12 feet and sank the putt to secure the historic title and his first European Tour win.

“It’s unbelievable,” 27-year old Sullivan said during the trophy presentation. “After Saturday I didn’t think I stood much of a chance with Charl getting ahead that far.”

“Charl has won Major Championships; my caddie said ‘expect him to hole’ (his third shot) and he nearly did. I was delighted just to hit the green and have a chance to win and I’m just glad I took it.”

“I played fairly decent but struggled with the driver badly today. I kept leaking it right the whole way in, everything went right.” he shrugged. “Hats off to Andy though, he hit a fantastic shot out of the rough there on 18 and made a great putt. Sometimes that’s the way it goes.”

England’s Lee Slattery carded a closing 69 to finish third, just a shot outside the play-off, with Spain’s Pablo Martin another shot back in fourth after also carding a 69 in the final round.

Australia’s Jason Scrivener made an impressive start to his first European Tour season by finishing in a tie for 11th place at 6-under par.

The new European Tour season hots up in more ways than one this week with a great field assembled for the Abu Dhabi HSBC Golf Championship from 15 – 18 January. Headliners include the return to action of world number one Rory McIlroy, number two Henrik Stenson, Justin Rose, Martin Kaymer and tournament invitee Rickie Fowler.