England’s Andy Sullivan captured his second victory in as many months on South African soil coming from behind to win the Joburg Open.

Sullivan, who also earned a place in this year’s Open Championship, produced a brilliant closing 66 for a 17-under par tally and after claiming a maiden title at the Sunshine Tour’s South African Open Championship at Glendower in January, just a few miles down the road from Royal Johannesburg & Kensington Golf Club. 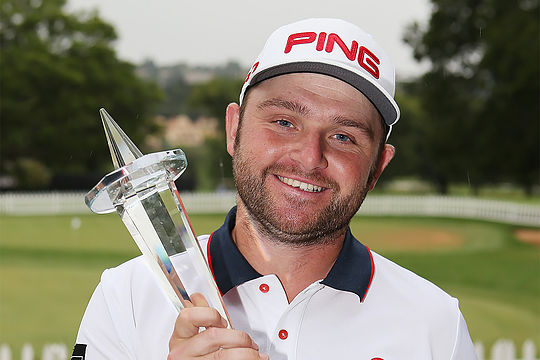 The Englishman, who gained worldwide attention last year in earning a trip into outer space for a hole-in-one at the KLM Open, finished clear of compatriots David Howell and Anthony Wall, the South Africans Wallie Coetsee and Jaco Van Zyl and Phelan.

There were also three places in the field at St Andrews available via The Open Qualifying Series, and it was a clean sweep of English players who took them with Sullivan joined by Howell and Wall in the year’s third Major by virtue of their higher position in the Official World Golf Ranking.

The 23-year old Phelan’s effort was his best finish since joining the European Tour however his 505th world ranking meant missing out on teeing-up at St. Andrews in July.

However there was good news for Phelan as he did enough to qualify for next week’s Africa Open on the Sunshine Tour and no longer needs to play Tuesday’s qualifier at Fish River Sun Country Club.

“I was just plodding along the first three days and played some nice golf and didn’t hole many putts,” he Phelan.

“I got the putts to drop on the front nine and gave myself a chance. It doesn’t look like I have done enough with a few lads coming in. But I am delighted with how I played. It was nice to have a chance coming in.

“But then it was not to signing my card I realised there was spots into The Open this week so I was just trying to play as well as I could, so that would be a bonus. I played here last year and played quite nicely but ended up missing the cut.

“But then it’s nice to get into the Africa Open next week.”

The 28-year-old Sullivan, the highest ranked player in the field this week, began the final round three shots behind overnight leader Coetsee, but moved to the top of a crowded leaderboard with five birdies in a flawless front nine of 32.

A bogey on the 11th dropped the former Walker Cup player a shot behind Howell, who had gone to the turn in 33, only for Howell to hook his tee shot into the water on the 14th.

Wall’s challenge also faltered when he found water on the 15th and it was Sullivan who held his nerve down the closing stretch with birdies on the 15th and 18th to seal victory.

“It’s unbelievable,” Sullivan said at the presentation ceremony. “I never imagined it would happen again so quickly. Coming down the stretch me and my caddie were loving life again and enjoying it. It seems to be a theme, enjoying my golf and getting the right results at the moment.”

“I think I am already there to be honest with you. I am on the crest of a wave at the moment and I don’t want it to end. I just want it to keep going.”

“I want to say a big thank you to my coach Jamie Gough, who has really turned it around, and my psychologist Lee Crombleholme who has been exceptional this week, working hard on being patient out there.

“I am just grateful it has all paid off and I get to hold another magnificent trophy in South Africa again.”