It was fourth-time lucky for Anthony Summers, who broke his 21-year career drought in fashion closing with a 7-under 63 to claim his maiden Australasian Tour win at the 2014 Queensland PGA Championship on Sunday.

Summers finished at 24-under at the City Golf Club in Toowoomba for a three stroke win from overnight leader New Zealander Ryan Fox, with David Bransdon in third position at 19-under. 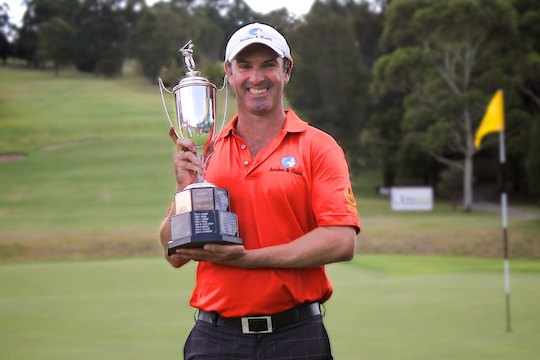 “I was tight and tentative during Saturday’s third round 70 and my score showed it,” said Summers.

“Overnight I went through a whole lot of emotions and thought to myself, ‘the great players get more aggressive as a tournament unfolds and I’m not going to walk to the finishing line tomorrow – I’m going to run through it’, and by playing aggressive yesterday it worked.”

Putting aside the $18,000 winner’s cheque, the victory was important for Summers in a number of ways most of which is the confidence he’s received from his maiden win which was a long time in the making.

“I’ve been close before but never really got across the line,” said Summers who finished runner-up in this event in 1996 and was runner-up at the 2004 and 2011 NSW Open.

“I’ve been in Ryan’s [Fox] seat plenty of times. It’s awesome to finally crack it for a win. I’m going through a whole bunch of emotions. It’s so exciting and a relief.”

This was a victory well deserved for one of the Australasian PGA Tour regulars, who is also a teaching member of the PGA of Australia after Summers completed his PGA traineeship in 1988 at Sydney’s Concord Golf Club before joining the tour in 1991.

Summers blasted out of the blocks with an opening 61 and followed that with a second round 62 and then closed the door with 63 to fully justify the victory.

“At least I’ve now got a job on Tour for the next two years,” said Summers, who received a two exemption from the PGA of Australia with the win.

Fox had taken a one-shot lead into the final day yet his closing 67 was not enough to match Summers, who stormed home with the help from a stroke of good fortune on the 16th.

Summers’ drive had missed the fairway but a miraculous second shot from the trees found the cup for an eagle two, which catapulted him to a three-shot break over Fox whose birdie putt on the same hole had refused to drop.

“I hit a three wood from the tee and carved it right under trees which was only the third time all week I’d missed the fairway,” said Summers.

“I had to go under branches and then gain height to get it out. I couldn’t even see the flag but when I heard the crowd roar I realised what had happened.”

“Sometimes you just get lucky.”

Queensland’s Taylor MacDonald was the tournament’s leading amateur after finishing at 11-under-par.

Defending champion Brad Kennedy finished with a 67 to share fourth position at 18-under with Stephen Dartnall.