Even three world No.1′s couldn’t tame a swirling and windy Muirfield Village on day one of the Memorial tournament in Ohio.

Rory McIlroy joined a returning Tiger Woods and Brooks Koepka in the marquee group of the day but a combined 23 majors wasn’t enough to stop being upstaged by Tony Finau, who fired off six birdies and a lone bogey across his back nine holes to take a one shot lead.

“I felt good. I played nicely. I think I scored it about as good as I could. Got some good breaks early on my back nine,” said Finau.

“I think on a golf course like this in these conditions, it really forces you to think about every shot and stay in the present, and that’s what I was able to do today.”

World No.1 McIlroy wasn’t able to get his game going, however two birdies on the way home was enough to get him to 2-under and leave the 31-year-old four shots off the pace.

Woods, who holds five Memorial titles, was another shot back at 1-under following a birdie at the 18th hole while Koepka matched five birdies with five bogeys to come out even for the day. 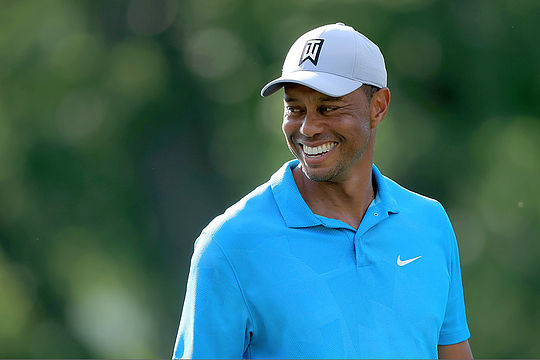 “I got off to almost an ideal start and got a feel for the round early. I just didn’t make anything today. I had looks at birdies, but I really didn’t make much,” said Woods.

“I would like to have started with easier conditions. It was hot, the ball was running. When I watched last week it wasn’t doing that, and certainly the practice round it wasn’t doing that. But the golf course has changed. It’s gotten faster, and it’s only going to continue to get faster.”

While the superstars failed to fire, spare a thought for the likes of last week’s Workday Charity Open winner, Collin Morikawa (76), Dustin Johnson, Rickie Fowler and Xander Schauffele (78), who will all need their best games on display tomorrow or risk having the weekend off.

Johnson opened with an inexplicable four-putt double bogey, followed by a birdie and a triple-bogey at the par-3 12th to set the tone for the day. The World No. 4 signed for an 8-over 80.

Rickie Fowler went one better with seven bogeys, a triple-bogey and a lone birdie leaving him at 9-over 81.

Marc Leishman heads the small Aussie field in equal 25th at even par followed by Jason Day at 1-over. Cameron Smith and Jason Scrivener carded a pair of 74′s to lie in a share of 59th.