Swafford back on top after years of struggle

American Hudson Swafford has collected the Corales Puntacana Resort and Club Championship after triumphing by one stroke courtesy of a Sunday 3-under 69 to claim his second PGA Tour title.

Swafford was two shots behind overnight leader Adam Long heading into the final round in the Dominican Republic. Swafford, who won his maiden PGA Tour title at The American Express in 2017, managed to move to a four shot lead sitting at 5-under through nine holes before a double bogey on the 6th hole and a bogey on the 15th brought him back to the field.

On the 17th Swafford nailed his tee shot to a tap-in distance to open a one shot lead down the last. He finished at 18-under par, the third straight winner at Corales Puntacana to finish with that score.

“Obviously a couple on the back nine that just burned the edges, but I putted great on the front, putted great all week,” said Swafford after his victory.

“Last two years have been tough. Not family-wise, though. Me and my wife had our first son, life’s great and golf was really hard, and to do this, it’s fun. This is why I get up and grind.”

“I ended up finding out I had a broken bone in the bottom of my foot that had to be removed. They took it out. The bone was dead. I felt like I had just gotten confidence back and then that setback was there,”

What’s In The Bag: Hudson Swafford

The 33-year-old started this season with a major medical extension, needing to earn 105 FedExCup points in his next two starts. But thanks to Sunday’s win, he’s now fully exempt on Tour through the 2022-23 season.

Since Puntacana is temporarily a full-point event, the win also means he will be exempt to play the 2021 Masters in addition to starts at Kapalua, The Players and the PGA Championship next year.

Swafford played his college golf at the University of Georgia and turned professional after graduating in 2011. 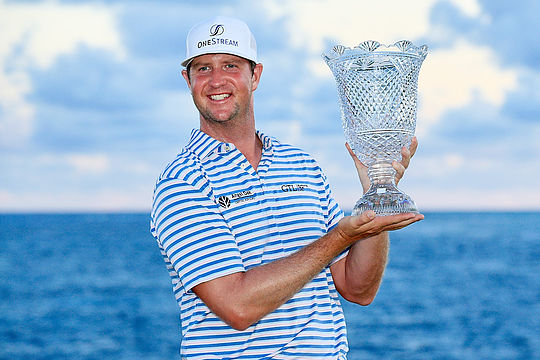 He joined the Nationwide Tour in 2012 and picked up his first victory at the Stadion Classic shooting a course record 62 in the final round.

Swafford played in the Web.com Tour Finals in 2013 and finished 21st to earn his PGA Tour card for 2014. As an amateur he won the 2006 Dogwood Invitational.

Originally scheduled for March opposite the WGC-Dell Technologies Match Play, the Punta Cana event was postponed because of the COVID-19 pandemic.

Next year it will return to its March slot on the schedule, making it one of three events (along with the Masters and US Open) to be played twice during the Tour’s 2020-21 season.