O’Reilly, who is formerly from the Toronto Golf Club near Newcastle before moving to Pennant Hills in Sydney, was quick out of the blocks opening with a birdie on the 1st hole which got the momentum going for the 23-year-old. 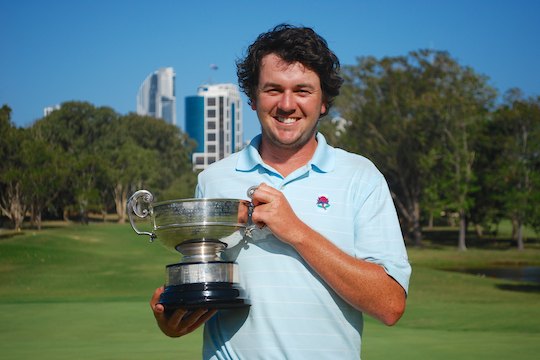 By the turn of the opening nine O’Reilly had extended his lead to four.

“I had my game going early and was able to get a break quickly and held on,” said O’Reilly.

“To win a state title like this Queensland Amateur is what you aim for. I feel my game in the last twelve months has come along way. I play courses better and mentally, I feel stronger out there. This is an important victory for me.”

Before this win O’Reilly’s best result was a win at the Avondale Medal, although he secured top-10 results at the 2012 NSW PGA Championship and South Australian Amateur Classic.

With the prospects of gaining a major Australian amateur title, O’Reilly continued to apply the pressure to McLeod.

Another win on the 13th and the margin was out to five. McLeod bravely fought back with a birdie on the 14th, but when O’Reilly birdied the 17th he headed into the afternoon session with a commanding five hole lead.

“It was a great position to be in,” said O’Reilly.

“You always want to get a sizeable lead early and then just hang onto it. It proves my game has improved and nothing beats getting that first main victory in such a way.”

O’Reilly’s 6th and 7th birdies of the day enabled him to extend his lead to seven through twenty-three holes. After dropping the 24th hole, O’Reilly made yet another birdie and with a seven hole lead and only eleven holes remaining made McLeod’s challenge difficult.

On the 28th hole O’Reilly finished in style with his 9th birdie of the day, as he claimed the trophy.

“I was please with the way I was able to close the championship out,” said O’Reilly.

“That’s something that you only learn from actually doing. My aim is to get my world ranking as low as possible and later in the year I will give Aussie Tour School a go. I feel my game is there and that I ready to be tested.”

O’Reilly’s next event will be in a fortnight at The Federal Open Amateur in Canberra where he will go in pursuit of another victory.

“The Federal Open is a wonderful event and I’m looking forward to playing. Sure, it would be great to get back-to-back victories and that’s what I’ll be aiming for.”

“At present I’m just enjoying this victory and there is so many wonderful names on this trophy. This is something special.”