Moore Park, St Michael’s, Concord and New South Wales are the finalists for the 2012 Division 1 Sydney Major Pennant following the completion yesterday of the six round qualification series.

New South Wales finished the top-seed taking out Section 2 with five wins and 33½ individual matches to be ahead of St Michael’s. 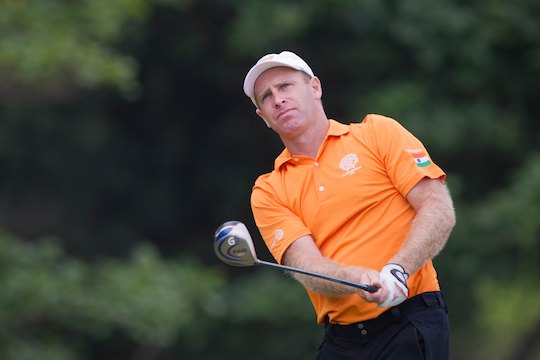 In a repeat of last year’s final – won by Moore Park with a 5½ to 2½ victory – New South Wales will play Moore Park in next Sunday’s first semi-final at Twin Creeks after Moore Park finished ahead of The Australian in Section 4.

St Michael’s and Concord will contest the other semi-final after St Michael’s pipped Bonnie Doon by the narrowest of margins following a week of debate between St Michael’s and New Brighton over the call by New Brighton’s Captain to cancel their fifth round match despite the club holding a member’s competition on the scheduled day with carts as well as conducting a full day of social play.

St Michael’s and North Ryde filed official complaints with Golf NSW alleging that New Brighton had breached condition 19.1 of the Major Metropolitan Pennant Conditions in that the club did not make every effort to play the contest on the scheduled day and time.

With the submission of photographic and video evidence to support their position – showing mown fairways, cart usage as well as results published the next day with a full member’s competition completed.

Golf NSW declared the match a forfeit to St Michael’s as they were satisfied that play could have taken place, even on an abridged nine hole layout.

As a result of the protest, St Michael’s was kept in the series heading into the weekend and North Ryde missed the relegation series, which New Brighton will play.

As to who will win the prized Division 1 Pennant, on paper it is hard to differentiate the teams.

Considered one of the power houses of Sydney Pennant golf, next Sunday’s semi-final will be Moore Park’s seventh straight finals appearance with the club last winning the prized flag following successive victories in 2008 & 2009 as well as last year when they accounted for New South Wales with a 4½ to 2½ victory.

St Michael’s won the flag in 2010 defeating Moore Park, 5&2, for the club’s seventh flag. It was a victory twenty-four years in the making and had came off a development program headed by John Serhan, Jeff Wagner and Gerard Raper.

Since St Michael’s have developed itself into one of the strongest pennant teams in the competition. The club will be looking to account for Concord and go one further than last year where New South Wales denied St Michael’s a consecutive finals berth with a 4&3 win at Monash Country Club to reach the final against Moore Park.

Matt Stieger is playing well as is Ben Clementson. Both recently recorded stellar wins with Stieger securing the Monash Masters and Clementson winning the NSW Cup.

The middle order of St Michael’s is supported well by Zack Mullins and former NSW Amateur Medallist, Michael Williams. It’s a team that bonds well and should prove problematic for Concord.

Whether St Michael’s can take another flag will very much depend upon how its lower order supports Stieger, Clemenston, Williams and Mullins.

Concord is the sleeper in this series.

Concord narrowly took out Section 3 over Pymble, advancing through on individual games after both teams recorded five wins and a loss.

The team is making its first finals appearance for some time and, in this respect, is an unknown quantity. Having accounted for Pymble, it would be unwise to discount Concord’s chances.

Moore Park having lost five players from last year’s winning team with Grant Thomas, Luke Henwood, Lincoln Tighe and Jamie Hook progressing to the professional ranks, is in the process of re-building.

Despite this, Moore Park is a team that thrives on playing in the final series and with the likes of Dimi Papadotos, Clancy Bowe, Matt Gleeson and Matt Grandell – all experienced match-play exponents – they should perform strongly against New South Wales.

Moore Park’s strength is the club’s ability to field seven strong players and not to expose any weaknesses in its line up.

New South Wales is a team packed with talent and experience and will be hungry to make amends to last year’s finals loss to Moore Park. It is a team that impresses me and I tend to strongly favour New South Wales chances of claiming the flag if it can dispose of Moore Park.

Michael Lambert, runner-up to Brett Drewitt at the NSW Amateur championship last month, Michael Bell, Matt Burns and Dean Van Kampen are stalwarts for the NSW team and have performed well in this series.

New South Wales will prove a stern challenge for Moore Park and the winner of this semi-final will certainly be battle hardened for the final at Ryde-Parramatta the following week.