Finalists for the Sydney Metropolitan Major Pennants series has been decided following the six round qualification series.

Division 1 defending champions St Michael’s was the only club undefeated in the top division to easily qualified for the semi-finals series which gets underway this Sunday throughout Sydney. 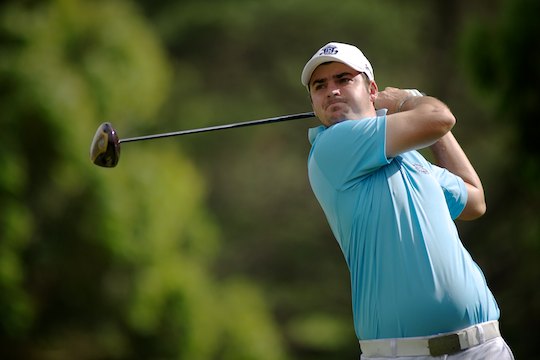 Brett Drewitt from Long Reef in action during the final round of the Sydney Major Division 1 Pennant series (Credit: Anthony Powter)

The other side of the Division 1 semi-final draw has Long Reef up against Bonnie Doon with the matches to be contested at Manly Golf Club.

This will be an evenly fought semi-finals series in Division 1, although St Michael’s heads into the finals without a loss and with the most individual games won (31), followed by Long Reef (29), Bonnie Doon (27) and Moore Park (27).

Travis Smyth and Dan Kolar remain undefeated in a St Michael’s lineup, which includes a number of emerging players such as Shaun Cameron, Zac Mullins and Tim Hyland. They are underpinned with the experience of Luke Roberts, Ben Clementson, Scott Morrison and Rohan Dunn – all former players in the victorious 2012 St Michael’s team.

Moore Park’s capacity to field week-in-week-out a top quality lineup has seen the club become a formidable force in Division 1 over the years with three wins in six years, the last coming in 2011 when they defeated NSW at Pennant Hills.

With a number of main players such as Grant Thomas, Dimi Papadatos and Lincoln Tighe progressing to the paid ranks, Moore Park has in recent times embarked on a successful team re-building program.

Clancy Bowe, Matt Gleeson and Steve Slappendel spearhead this wonderful lineup and the Moore Park against St Michael’s matchup will be a corker.

Brett Drewitt has played brilliantly this season as number 1 for Long Reef, no more so than his 5&3 smashing of North Ryde’s Michael Hooper on the weekend to set up the team’s 5 1/2 – 1 1/2 victory and a semi final position.

Nathan Walters, Will Barnett, Steve Prior and Dylan Perry have played well all season. Long Reef are no strangers to the semi-final series and is a team that will certainly challenge Bonnie Doon.

With the added power of Jordan Zunic and Ruben Sondjaja, Bonnie Doon this season has been touted at the team to beat.

Certainly the Doon’s lineup is impressive yet following a 5-2 loss on the weekend to NSW, the team will need to rebound against Long Reef in Sunday’s semi-final.

Jordan Zunic is a formidable match play exponent and this season won the Tasmanian Open to record nine top-10 finishes in the last twelve months. A possible Zunic against Drewitt top-order clash on Sunday would be a sensational match.

Monash, Antill Park, Pennant Hills and Bankstown have progressed to the Division 2 semi-finals, with Killara, Woolooware, Bayview and Windsor fighting out Division 3.