Australia’s Austin Bautista has shot the lights out at the San Diego County Open in California to earn a winner’s cheque of US$10,000 at the historic event.

Bautista fired rounds of 69-63-64 for a three-day total 17-under, which included 21 birdies and two eagles. 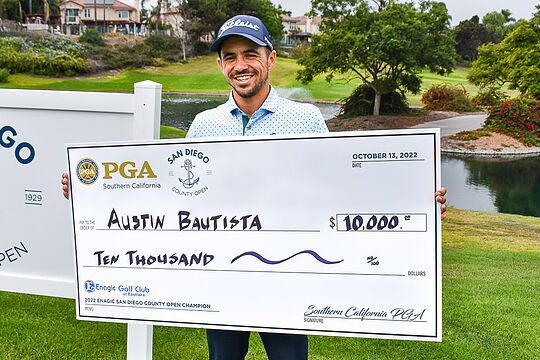 The event, which debuted in 1929 and lists Sam Snead and Billy Casper amongst its winners, returned from a 20-year hiatus in 2020 thanks to financial input from Japanese title sponsor, Enagic.

“I’m very confident when I’m playing well,” said Bautista. “I shot 8-under yesterday, and my putter was rolling, and my mindset was I’m going to win. I won the tournament on 17 today. I had a one-stroke lead and hit a perfect cut 4-iron to eight feet and made the putt.”

Rico Hoey finished four shots adrift of Bautista on 13-under followed by Jonathan Yoshihiro and Alex Chiarella in a tie for third on 9-under.

Following a self-imposed break from golf in 2018, Bautista made a triumphant return to the podium with a seven-stroke win at the NT PGA Championship earlier this year.

The victory added to an earlier runner-up finish this year at the WA PGA Championship and two third places finishes at the TPS Sydney and TOS Murray River for the Sydneysider.