Sydney’s Cameron Davis has fired a 7-under 64 to share a four-way first round lead at the Northern Trust and the opening tournament of the FedExCup Playoffs.

Davis, who currently sits in 91st place on the FedExCup, carded eight birdies and a lone bogey to ensure he is well on his way to earning enough points to get him into to the top-70 for next week’s BMW Championship. 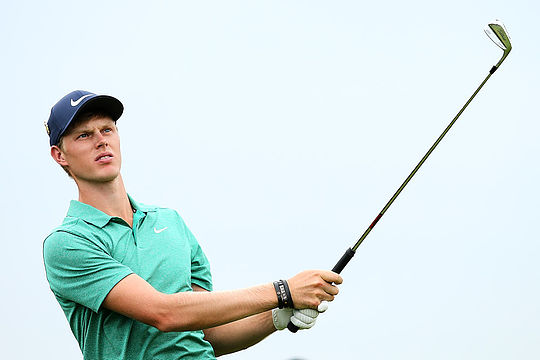 “My game suits this place pretty well. There’s a bit more room off the tee. I feel like I have been hitting my irons pretty well the past few weeks so I felt like all I had to do was not to get ahead of myself and play a good solid round of golf,” said Davis.

The 25-year-old sits alongside Russell Henley, Kevin Streelman and Harris English and is one shot ahead of a group of seven players including Bubba Watson and Matthew Wolff.

Davis showed he has what it takes to win at the top level, when at just 22-years-old, he fired a final round 64 to defeat the likes of Jason Day and Jordan Spieth and secure the 2017 Australian Open title. He followed that up six months later with his first win in the US at the Nashville Golf Open on the Web.com Tour.

Adam Scott eagled the 18th hole (his 9th) on the way to a respectable 5-under 66 that leaves him in a eight-way tie for 12th. Scott is sitting in 36th place in the FedExCup and has this week and next to get himself inside the all-important top-30 in time for the Tour Championship.

Current FedExCup leader Justin Thomas carded a 3-under 68 and sits amongst a log-jam of 23 players in 30th place including Tiger Woods and Australia’s Matt Jones.

While Woods had put aside his long-time Scotty Cameron putter at the PGA Championship, it was back in the bag this week after not being as pleased with the replacement as he had hoped.

“I had one good day, the first day [at the PGA], and then after that I didn’t really putt well,” he said.

“I had a good feel today. I had nice pace, and I like the speed of these greens. They’re fast. Even though they’re soft, but they’re still quick. I just felt comfortable. That’s one of the weird things about golf. It’s just the way it is sometimes,” said Woods, who needed just 29 shots with the putter today.

Five shots off the pace are a group that includes World No. 1 Jon Rahm, Jordan Spieth, Rory McIlroy and Aussie Cameron Smith.

Phil Mickelson has the enviable record of making every round-of-70 FedExCup Playoff event since its inception, however, his opening round of 3-over 74 leaves him with plenty of work to do tomorrow if he is to make it through to the weekend. Lefty currently lies 79th in the standings.