It’s been a long journey but Sydney’s Harrison Endycott has finalised reached his goal of playing the PGA Tour following his top-25 finish on the Korn Ferry Tour money list on Sunday.

The 26-year-old entered the final tournament of the regular season in 19th place before a 55th place result saw him drop from 19th to 21st position but safely inside the all-important top-25 players who earn a ticket to the big show next season. 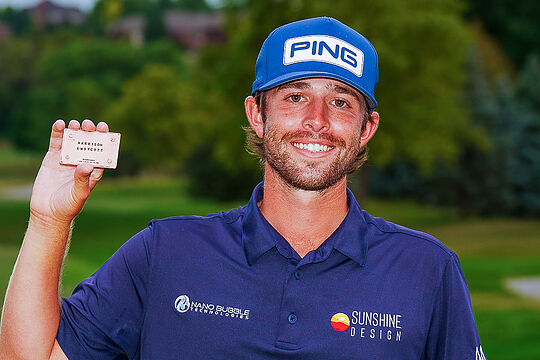 “Coming to the end of the year. You just grind so hard and you work so hard for not only weeks but years and years and years,” said an emotional Endycott after his round.

“And it’s a very small percentage of women and men that get to that point, the pinnacle of golf, so to have my Dad all the way from Australia at the last event, it’s super special.”

“We’ve had a lot of challenges in our family…so it’s great to have him [Dad] here.”

“I’m just so proud of him,” added his father Brian. “Getting to where he is… as you can see we’re both emotional because he worked so hard for this. Very, very hard.”

Endycott, who plays out of Sydney’s Avondale Golf Club, chose to take the road less travelled in his bid for a PGA Tour card. Following a move to the pro ranks in 2017, Endycott headed to South America to compete on the PGA Tour Latinoamerica circuit, which acts an alternate gateway to the Korn Ferry Tour Q-School.

The gamble paid off and the New South Welshman eventually earned his way north to the Korn Ferry Tour in 2022.

A victory in his rookie season at the Huntsville Championship in May and another two top-10 finishes was enough to finally realise a dream four years in the making.

Curtis Luck was next best of the Australians on the end of year tally in 96th place followed by Ryan Ruffels in 141st position on the ladder.