Despite missing the cut at the Epson Tour Championship, Sydney’s Grace Kim secured one of 10 cards on offer from the secondary Epson Tour’s Race to the Card standing after finishing 5th in the standings.

Kim fired rounds of 70-75 finishing well down the leaderboard and more five shots shy of the cut yet was in the fortunate position not to have had to make the weekend having enough results from the season to get the promotion to the main tour. 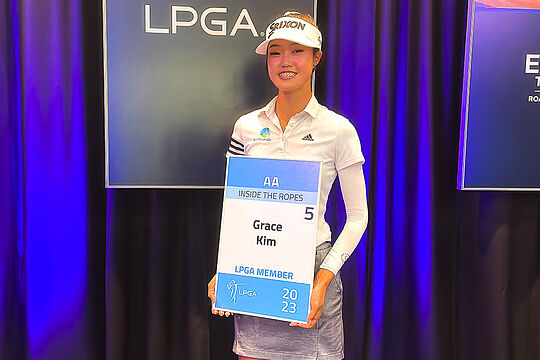 “To be able to finish top 10 and get it done during the first year…a lot of the girls repeat year after year and I’m quite fortunate and blessed to have got it done the first year,” said a relieved Kim.

“Performance-wise (this week) wasn’t good but mentally it didn’t really stress me as much as the girls outside the top-10. I was in a ‘safe’ position but I didn’t want to settle my mind too much about it because anything could happen.”

Kim’s rise to the main tour was on the back of a breakthrough win at the IOA Golf Classic in May, with four further top-10 finishes and total prize money of $US89,720.

Fellow Australians Gabriela Ruffels and Robyn Choi finished T11 and T20 respectively at the Tour Championship which wasn’t enough to force their way into the top 10.

Ruffels fell one spot to 15th while Choi ended her best year to date in 17th position, the pair now destined for the LPGA Tour Q-Series to try and earn a card for 2023.

Thailand’s Jaravee Boonchant took out the season-ender with a one stroke victory over American Riley Rennell. Boonchant had four top-10 finishes to add to Sunday’s win.

Unfortunately, the win wasn’t enough to secure Boonchant a spot in the top-10 of the season’s final money list. The Thai finished at No. 12 on the Epson Tour official money list, which means she will be exempt from Stage Two of the LPGA Tour Qualifying School. Her next chance at 2023 LPGA membership will happen at the Q-Series in December.