The Korean-born Australian finished at 15-under alongside Seo Hyung-seok, who missed a 5-metre birdie putt at the final hole that would have secured victory. 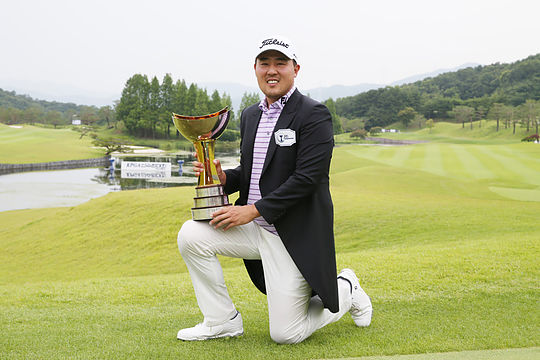 So it was off to the first playoff hole where both players put their approach shots to roughly three metres. Seo left his uphill birdie putt long while Lee was able to put his at the bottom of the cup to secure victory.

Lee began the final round with a five-shot lead following rounds of 62, 64 and 68 and looked to have the tournament in the palm of his hand until a double-bogey at the par 4 5th hole signalled the nerves may be getting the better of him.

However, he was able to steady the ship with birdies at the 8th, 9th and 11th holes before coming home with two late bogeys for a round of 1-over 71.

It was Lee’s first professional tournament win since turning pro in 2006 and he did it in style leading from start to finish.

He is the fourth foreign player and the third Australian to win the title with Andrew Mackenzie claiming the title in 2008 and fellow Japan Tour player, Matt Griffin, in 2014.

Following a stellar amateur career, Lee, who played out of the Concord Golf Club in Sydney but now lives in South Korea, was hailed as the next big thing at the time.

He finished runner-up to Craig Parry alongside Nick O’Hern and Brandt Snedeker at the 2007 Australian Open and went on to finish 8th on the Australasian PGA Tour Order of Merit that season but since then has been unable to find his winning form.

“Even though I was leading by five shots, the five-shot difference was never enough.”

Jeon Jun-Hyeong and Jo Min-Gyu, who have two wins on the Japan Tour, tied for third on 14-under while Moon Kyung-Joon, who won the SK Telecom Open this year, tied for 5-under 67.