Won Joon Lee secured his second win on the Korean PGA Tour on Sunday winning the Bizplay Open which sees the Sydney-based professional moving to 5th on the tour’s Order of Merit.

Lee started the final round with a three-shot lead over Seunghyuk Kim at Tameus Country Club, with the tournament having been reduced to 54 holes when weather delays forced round two to be abandoned as high winds lashed the area. 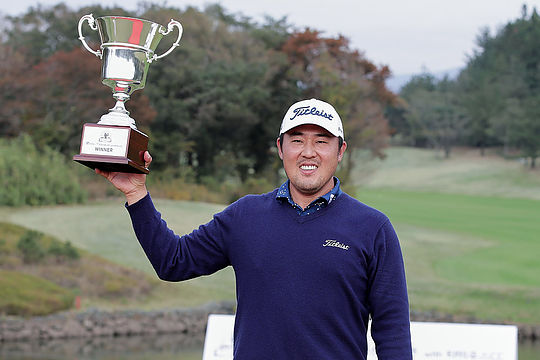 With two wins to his credit in the space of 13 months, the Korean PGA Tour has been a happy hunting ground for Lee, who also plays on the Japan Tour where during last season he finished 50th on the money rankings with ¥17,088,775 (A$228,902) in earnings.

Sunday’s win in Korea saw Lee pocketing nearly A$125,000 for one of his biggest pay days since turning professional in 2006.

A former Eisenhower Trophy representative in Australia, Lee has recorded numerous runner-up finishes on the Web.Com, the Australasian and Japan Tours, including finishing runner-up to Craig Parry at the 2007 Australian Open at The Australian in Sydney.

Lee, 35, won the PGA Championship on the Korean Tour, winning in a playoff over Hyungseok Seo last June for his maiden tour win.