Whilst it’s more akin to reality golf on TV, given the current state of affairs an indoor TrackMan professional competition brings some relief to fans and Scotland’s Connor Syme took out the second instalment of the BMW Indoor Invitational on Saturday.

Syme beat a field including major-winner Martin Kaymer and last week’s winner Joost Luiten to collect $10,000, which will benefit two charities of his choice. Syme shot an eight under par round of 64 to secure a two shot victory as the action in the BMW Indoor Invitational moved to Royal Portrush.

The Scot finished top of a leaderboard featuring 28 European Tour players in the second of five events in the new series of virtual golf tournaments using the latest simulator technology from TrackMan.

“It was my first time competing in something like this on Trackman, so I really had no idea what a good score would be, but I was very happy with the numbers,” said Syme. 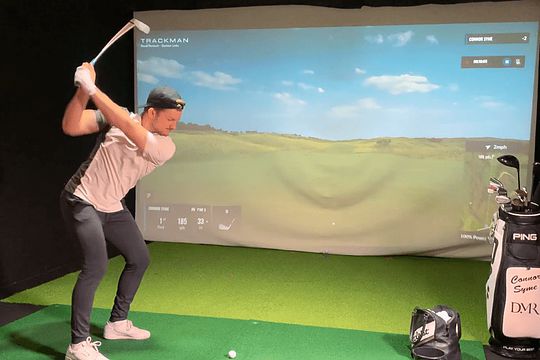 “I’ve actually been following a program with Spencer Henderson, the Scotland under 18 national coach. He’s been keeping us busy on Trackman, so I probably owe a lot of this win to him. I don’t know how sharp I would have been otherwise.”

The players competed virtually over the historic links layout from their own homes in the one round, 18 hole stroke play event. Each of the five tournament winners in the BMW Indoor Invitational are receiving $10,000 towards good causes of their choice.

The 24-year-old elected to split the cheque between two charities that will benefit from the donation during the COVID-19 pandemic – FoodTrain, which supplies meals to the elderly in Dundee, Scotland, and Hospice of the Valleys, a charity close to his heart which provides palliative care.