If you haven’t noticed the talent of young Avondale (Sydney) golfer Grace Kim, don’t worry, you soon will.

Kim, who turned 18 this week, is making the world sit up and take notice and etched her name into the record books on the weekend when she won the inaugural ANNIKA Invitational Australasia, finishing 14-under-par in scoring a three-shot win at New Zealand’s Royal Wellington Golf Club. 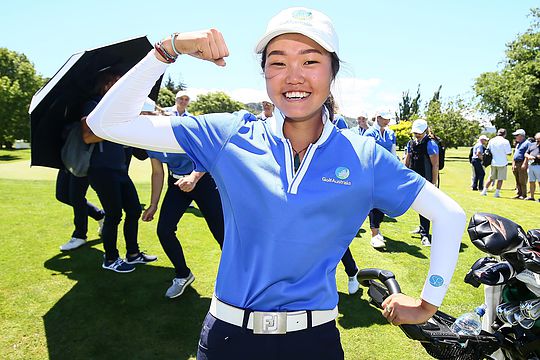 Kim set that up when she surged around the course with an incredible 10-under-par 62 in the second round of the three-round tournament.

Back on the course that afternoon, Kim maintained her slashing form in her first trip to New Zealand, firing a four-under-par 68 to win by three shots from Philippines golfer Yuka Saso.

“It feels amazing, today was a great day and this whole week has been incredible,” said the impressive youngster, who is being coached by Sydney’s Khan Pullen, who also coaches another of our young stars in former Australian Open champion Cameron Davis.

“Words can’t explain how happy I am with this week, so it will be a memorable one.”

“Putts kept dropping in on the front nine and then it became a bit of a struggle on the back nine.”

“But I hung in there and I am really happy with myself.”

“If I am able to attend the ANNIKA Invitational USA, it will be a huge honour.”

“My whole team was awesome this week so a big shout out to them for a great week.”

With the great Annika Sorenstam in town to cheer the players on, Kim could not have hoped for a better week to celebrate her birthday.

She now gets the opportunity to join Saso and third placegetter another Australian in Doey Choi to compete at the ANNIKA Invitational USA.

Yet another Australian, Stephanie Kyriacou was unlucky to finish in fourth place, just missing the chance to play in the US version of the event, despite a slashing seven-under-par 65 in her third and final round.