Taylor MacDonald has won another national selection title taking out the Federal Amateur with a one stroke victory over Daniel Gale and Patric Wilson in Canberra. 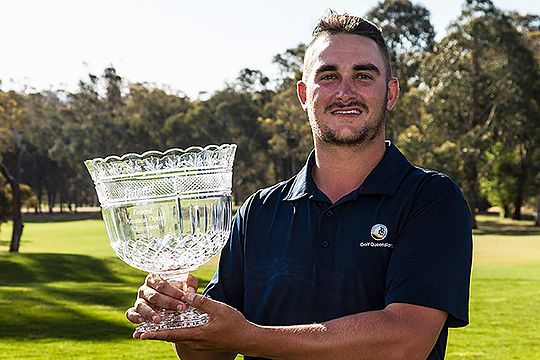 “The conditions got a little fickle towards the end,” said MacDonald.

“It was good to close the tournament out and get another win. It shows I am doing the right things at the right time. Like that 40 footer putt on 16 really saved me and kept me in the game. It things like that which makes the difference.”

Jordan Zunic and Ryan Ruffels shared 4th position at 14-under, with Ruffels taking out the Federal Junior medal with rounds of 69-69-68-68.

MacDonald came off the back of a runner-up finish at the Keperra Bowl a fortnight ago. A win and a runner-up finish in the opening national trial event series certainly highlights MacDonald’s talents and position on the Australian amateur circuit as one of our best.

“I’m focusing more on my preparation and getting right for the tournaments,” said MacDonald.

“Next year I’ll be going back to the US to play their amateur events and will also play more in Europe. I also want to focus more on the professional events and do well there.”

Ranked our 4th highest world amateur at 28th in the world, MacDonald has also recorded five top-5 finishes in national selection events last season in Australia and made the sweet 16 at the prestigious Western Amateur in the US back in August.

Cameron Haines finished in 6th position at 10-under, with Darcy Brereton, Joshua Cabban, Travis Smyth in a share of 7th position at 9-under.

Cameron Davis, who is winless in two years yet has retained his national squad position for 2015, finished in a tie for 14th position eleven shots back from MacDonald.

The next main amateur tournament on the Australian circuit is the Tasmanian starting 20 November, although a number of elite amateurs will be competing this week at the NSW Open at Stonecutters Ridge in Sydney.