In the fourth instalment of The Match, it was debutants Bryson DeChambeau and Aaron Rodgers, who came out on top, defeating Phil Mickelson and Tom Brady, 3 & 2, at the stunning The Reserve at Moonlight Basin in Big Sky, Montana.

If Mickelson was eyeing off a repeat of his PGA Championship heroics, those hopes were dashed early when DeChambeau chipped in at the very first hole to take an early 1-up advantage in the modified alternate shot event.

The lead bounced back and forth across the opening nine holes before DeChambeau and Rodgers were able to get themselves safely in front after securing the 10th, 11th and 12th holes for a 3up lead, which they held until Team Phil was able to win the par 5, 15th and reduce the lead to 2up with three to play.

However, it only took one more hole for DeChambeau and Rodgers to put an end to the day with the Green Bay Packers quarterback continuing his rock-solid putting to sink a 15-foot birdie at the par 3, 16th following Brady’s must-have birdie miss. 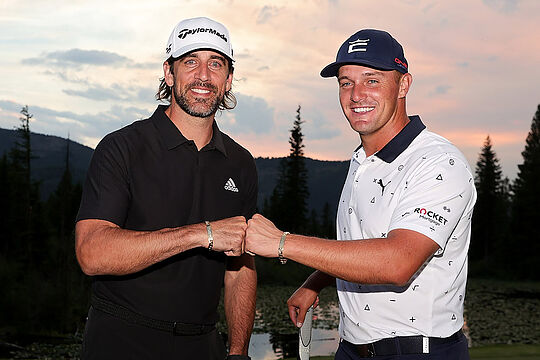 It is Mickelson’s fourth match and his second defeat after going down to Tiger Woods and Peyton Manning in March 2020 at The Match: Champions for Charity.

Proceeds from The Match were donated to My Brother’s Keeper Alliance, Feeding America, and the Montana Food Bank Network.