Two-time major winner Angel Cabrera and his son, Angel Jr., have taken out the PNC Father/Son Challenge with a combined 12-under 60 on Sunday to win by two shots over the teams of Bernhard and Jason Langer and David Duval and Nick Karavites at the Ritz-Carlton Golf Club in Orlando on Sunday.

In a unique format where scores are based on a scramble format, with the team playing the better of the two shots each hit, the tournament has attracted considerable interest with many of the world’s former best competing.

To qualify for the tournament, a player has to have won a major or The Players Championship and his partner can’t have a PGA Tour card.

Team Cabrera, competing in the Father/Son for the first time, opened with a 59 on Saturday and followed up with a Sunday 60 to post a 25-under 119 in the scramble format to earn a three-shot victory.

The 26-year-old Angel Jr., who goes by Angelito, is a professional golfer who has competed in 15 career PGA Tour Latinoamerica events and earned one PGA Tour start. 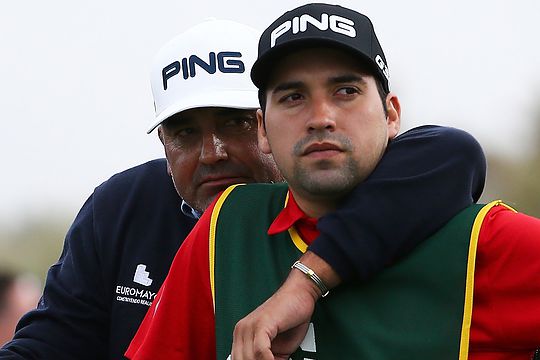 “This is certain my best week of the year,” said Cabrera, 48, the 2009 Masters champ and 2007 U.S. Open at Oakmont. “To play alongside all the legends…as well as playing alongside my son, has been the greatest week of the year. The good thing was that when I missed, he hit a good shot and the other way around.”

In the event’s 20-year history, the Cabreras are just the fourth father-son team to claim the title in their first appearance. The Argentinians were also the last of 20 teams to make the field, getting an invite after Curtis and Tom Strange withdrew.

Mark O’Meara and Shaun O’Meara tied for fourth at 21-under with Jerry Pate and Wesley Pate. Jack Nicklaus played with his grandson, G.T. and closed with a 64 and tied for 15th in the field of 20 teams.