Europe have completely dominated proceedings at the second EURASIA CUP matches in steamy Kuala Lumpur, running out winners over the Asian team by the margin of 18½-5½.

Leading by 9-3 with the Singles matches remaining, it was England’s Danny Willett who ultimately clinched the win for Europe with his 3&1 win over Byeong-hun An at the Glenmarie Golf and Country Club.

Any unlikely chance at a run at victory for Asia was quashed early on as Ian Poulter, Lee Westwood and Andy Sullivan led off with wins ahead of Willet, with the Europeans going on to win eight of the singles matches to lift the trophy after the inaugural match finished in a dramatic 10-10 tie two years ago.

Captain Darren Clarke, who will also lead the Europeans into Ryder Cup battle in the U.S. in September, was delighted with the performance of his players – all of whom would have been keen to make an early impression on the affable Northern Irishman.

“The team have played fantastic this week, some of the scoring was sensational,” Clarke said. “They bonded as a team, they had a great time together, they enjoyed each other’s company and they played well.”

“There have been a lot of positives this week. I did my homework and I’ve learnt a few things and hopefully I’ll do a better job come September,” Clarke said. 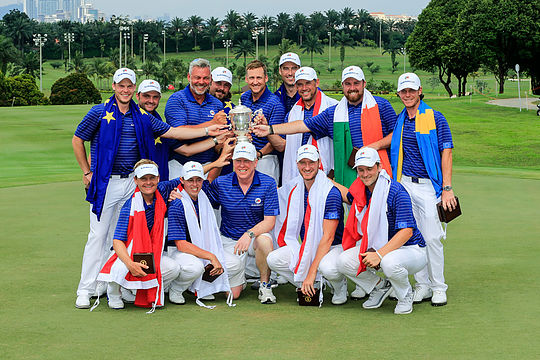 Clarke would have been especially pleased that veterans and team leaders Poulter and Westwood fully justified his decision to make them captain’s picks, with both delivering a point on all three days of the tournament along with fellow Englishman Sullivan.

Team Asia captain Jeev Milka Singh was full of praise for the dominant showing from the more experienced European lineup.

“I’d like to congratulate Darren and Team Europe for an excellent performance. They have played really well,” Singh said, “The Asian team have done a good job too but I think there was a shortfall on our putting. But it’s a learning experience and we look forward to next time.”

Singh spoke briefly of changes that he thought could be considered to align the Asian Team qualification process more to a Ryder Cup-style model.

His team list was noticeable for the absence of a number of players who may have bolstered their chances, the Japanese involvement for example was limited only to veteran Shingo Katayama, however the experience of the week has Singh keen to make amends in two years’ time if the opportunity arises.

“I’ve really enjoyed the experience. It was a pleasure working with these superstars and if I was asked again, I’d love to do it again.”